Brautigan, Richard So the Wind Won't Blow it All Away (Arena Books)

So the Wind Won't Blow it All Away (Arena Books) 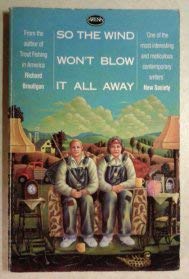 A tragic tale of doomed independence and dignity in the 1940s centers on a lonely, confused teenaged boy whose greatest pleasure is in watching two old people fish and who has killed his best friend in a hunting accident

Regretful and suffused with sadness, So the Wind Won't Blow it All Away, Richard Brautigan's final novel prior to his death by suicide in 1984, strikes a more sombre note that the earlier work that made him a famous figure in the American beat scene of the 1960s. Tracing the events leading ineluctably to the teenage narrator's accidental shooting of his best friend in post-World War Two Pacific West America, Brautigan employs the same elliptical word play and exhibits the same joy in the possibilities of language as in earlier works such as Trout Fishing in America. However, the narrative is shot through with a sense of sadness for a lost way of life, the departure of childhood and the death of the American gothic, something Brautigan blames on television for the way it "crippled the imagination of America and turned people indoors and away from living out their fantasies with dignity".

So the Wind Won't Blow it All Away is hugely underrated in the Brautigan canon. Although the story is set in the 1940s, the elegiac tone places the novel firmly within the context of the 1980s when it was first published. Brautigan took his own life two years after the novel's publication and the narrator's sense of alienation from modern America seems to mirror the way that his free-wheeling, free-associating sensibility had become hopelessly out of touch with the pervading culture of the time. But that is precisely why this small, beautifully sad novel is so important. Whereas in earlier works, Brautigan's characters viewed the world with child-like fascination and amusement, in So the Wind Won't Blow it All Away he reverses the process by examining a child's world through an adult's sad and diminishing gaze. It's a summation of all that Brautigan had previously achieved but in the harsher, colder climate of the late 20th century. --Jane Morris

* Poetic, gently eccentric and deeply poignant, the story is a fitting swansong for his life. The Times * Life is taken back to bare essentials in his books, never more so than here but life is never so rich. If someone ever made a movie of this, good people would watch it a hundred times and never tire of it. Beat Scene * The verbal humour and zany charm of the book remain quite irresistible. Daily Telegraph * Brautigan gets you drunk on similes, knocks you out with exquisite turns of phrase and leaves you with an ending that hits the entire novel out of the ballpark ... Amazing. Uncut

1. So the Wind Won't Blow It All Away

2. So the Wind Won't Blow It All Away