Items related to A Genius in the Family: Intimate Memoir of Jacqueline...

A Genius in the Family: Intimate Memoir of Jacqueline du Pre 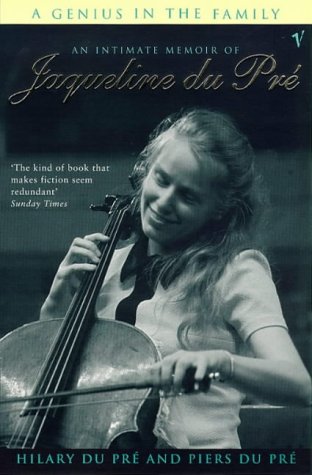 Since her death in 1987, Jacqueline du Pre's brother and sister have long felt that her life story has never been properly told. This is an often painful account of what happens when a prodigy is born into a family and how the driving force of the talent controlled not only her life, but theirs.

"No family should have less than three children. If there is one genius among them, there should be two to support him."

The life of Jacqueline du Pré is an enticing subject for biography. Child prodigy turned superstar cellist, du Pré came from a highly musical family, studied with the greatest musicians in the world, married the pianist Daniel Barenboim during Israel's Six Day War in 1967--and was struck down by multiple sclerosis in 1973, at the age of 28. From then on her deterioration was swift and merciless. In 1987 Du Pré eventually died, unable even to feed herself unaided, let alone play her beloved cello.

Du Pré's closeness to her family--in particular her sister (and early musical rival) Hilary, and brother Piers--has been well-documented, but the publication of A Genius in the Family was a revelation. Among other things came the blithe disclosure that the moody, brilliant du Pré, during a difficult period in her life, regularly slept with Hilary's husband "Kiffer"--with Hilary's blessing. Controversy raged; were Hilary and Piers saints who sacrificed the limelight and their own wishes to placate this temperamental genius? Or was the book a not-so-subtle attempt to destroy the myth of the tragic, beautiful du Pré--and to avenge lives lived in her shadow?

"These are our memories. This book is not a biography nor an account of Jackie's career.It is simply what happened. We offer the reader the story of our family, from within", write the authors in the preface to this memoir. Whatever the motives behind A Genius in the Family, it is a vivid account of the woman behind the icon, and an enthralling read. --Catherine Taylor

1. A Genius in the Family: An Intimate Biography of Jacueline Du Pre.