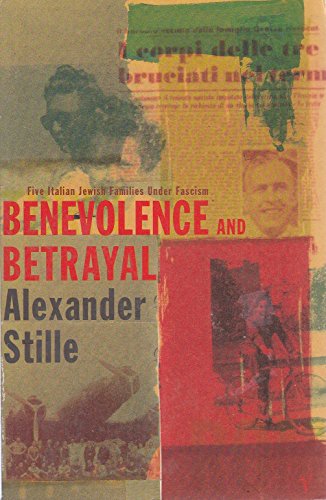 In Italy Jews and fascists coexisted as nowhere else - there were even Jewish members of the Italian Fascist Party. Both before and during the war, the experience of Jews in Italy was a strange mixture of sympathy and brutal persecution, benevolence and betrayal. Through the stories of five Jewish families, this book recreates the historical and social background of the period in which Jews confidently believed in their safety and comfort as unimagined disaster approached.

Alexander Stille's first book, Benevolence and Betrayal: Five Italian Jewish Families Under Facism, was chosen by the Time Literary Supplement as one of the best books of 1992, and received the Los Angeles Times Book Award for history. From 1990 until 1993, Stille reported on Italy for US News and World Report, The Boston Globe and the Toronto Globe and Mail, while contributing long articles to The New Yorker and The Atlantic.

Book Description Paperback. Condition: Very Good. The book has been read, but is in excellent condition. Pages are intact and not marred by notes or highlighting. The spine remains undamaged. Seller Inventory # GOR002437193

Book Description Trafalgar Square. Paperback. Condition: Fair. No Jacket. A readable copy. All pages are intact, and the cover is intact. Pages can include considerable notes-in pen or highlighter-but the notes cannot obscure the text. At ThriftBooks, our motto is: Read More, Spend Less. Seller Inventory # G0099223414I5N00