Items related to Battle Studies In The Peninsula

Battle Studies In The Peninsula 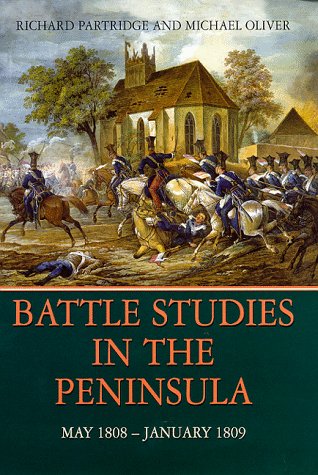 This source book provides detailed information on the campaigns and battles waged by the French, Spanish and British armies in the Peninsula War. This volume covers the six main conflicts between May 1808 and January 1809: Medina de Rioseco, Bailen, Rolica, Vimeiro, Tudela and La Coruna.

Richard Partridge and Michael Oliver have between them over 50 years experience as wargamers, and are the authors of Battle Studies in the Peninsula (Constable 1998) and The Napoleonic Army Handbook: Britain and Her Allies (Constable 1999).

1. Battle Studies In The Peninsula

Book Description Hardback. Condition: Very Good. The book has been read, but is in excellent condition. Pages are intact and not marred by notes or highlighting. The spine remains undamaged. Seller Inventory # GOR003972635

2. Battle Studies in the Peninsula

Book Description Condition: Very Good. Used book that is in excellent condition. May show signs of wear or have minor defects. Seller Inventory # 8839122-6

Book Description HARDCOVER. Condition: Fine. Dust Jacket Condition: Near Fine. First Edition. British first edition, first printing. Published in 1998. Virtually no wear to jacket. Jacket is NOT price clipped. Covers are clean and bright. Edges are sharp. No tears or creases. The book itself is in Near Fine condition. The binding is straight and tight. NO remainder mark.We're happy to provide pictures of any and all books for you, please just ask!. Seller Inventory # sku520009837

5. Battle Studies in the Peninsula May 1808 - January 1809. A Historical Guide to the Military Actions in Spain, Portugal and Southern France Between Jun 1808 and April 1814, with Notes for Wargamers.

Book Description Condition: Good. A+ Customer service! Satisfaction Guaranteed! Book is in Used-Good condition. Pages and cover are clean and intact. Used items may not include supplementary materials such as CDs or access codes. May show signs of minor shelf wear and contain limited notes and highlighting. Seller Inventory # 0094776202-2-4

7. BATTLE STUDIES IN THE PENINSULA: A HISTORICAL GUIDE TO THE MILITARY ACTIONS IN SPAIN, PORTUGAL AND SOUTHERN FRANCE BETWEEN jUNE 1808 AND APRIL 1814, WITH NOTES FOR WARGAMERS: MAY 1808 - JANUARY 1809.

9. BATTLE STUDIES IN THE PENINSULA

10. Battle Studies In The Peninsula