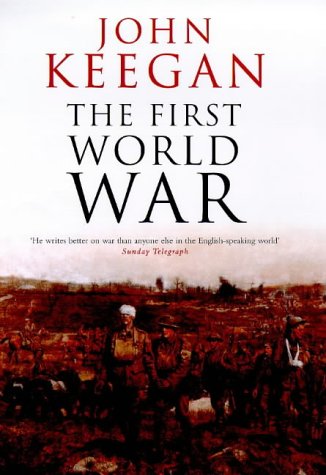 The battles on land, sea and in the air form the narrative heart of this World War I study, along with new interpretations of the military events and insights into the way the modern world was shaped by what happened between 1914 and 1918.

Despite the avalanche of books written about the First World War in recent years, there have been comparatively few books that have concentrated on delivering the big picture--a comprehensive account of the war and its campaigns from start to finish--and this book fills the gap superbly.

As readers familiar with John Keegan's previous books, such as the The Face of Battle, Six Armies in Normandy, and The Second World War, will know, Keegan is a historian of the old school. He has no earth-shattering new theories to challenge the status quo, no first-person accounts to tug on the emotions; what he does have, though, is the gift for talking the lay person through the twists and turns of a complex narrative in a way that is never less than accessible or engaging.

Keegan never tries to ram his learning down your throat. Where other authors have struggled to explain how Britain could ever allow itself to be dragged into such a war in 1914, Keegan keeps it practical. The level of communications that we enjoy today just didn't exist then, and so it was much harder to keep track of what was going on. By the time a message had finally reached the person in question, the situation may have changed out of all recognition.

Keegan applies this same "cock-up" theory of history to the rest of the war, principally the three great disasters at Gallipoli, the Somme, and Passchendaele. The generals didn't send all those troops to their death deliberately; they did so out of incompetence, ineptitude, and because they had no idea of what was actually going on at the front. Whether deliberate or not, though, the end result was nearly one million dead British and Commonwealth soldiers.

The First World War is not afraid to point the finger at those generals who deserve it, but even Keegan has to admit he doesn't have all the answers. If it all seems so obviously futile and such a massive waste of life now, he asks, how could it have seemed worthwhile back then? Why did so many people carry on, knowing they would die? Why indeed. --John Crace

"Nobody describes a battle as Keegan does, vividly relating the unfolding events to the contours of the field of combat... This book is a kind of war memorial. As first-hand memory fades, The First World War honours the dead as only true history can." (Niall Ferguson Sunday Times)

"John Keegan's The First World War can take its place alongside the other defining works he has written... The best and most approachable introduction to the war." (David Horspool Guardian)

"A splendidly readable account of the war on all fronts, from its political and cultural origins to its bloody conclusion... Compelling." (Max Wilkinson Financial Times)