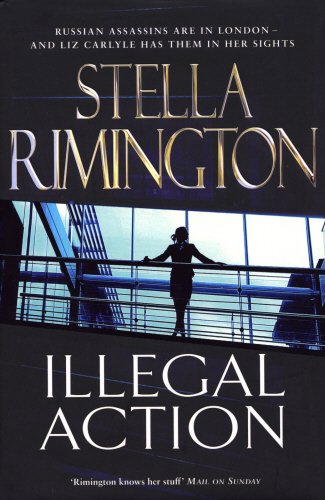 Liz Carlyle has been transferred to Counter-Espionage, along with her research sidekick Peggy Kingsolving. Once the hub of MI5 operations, the department has been reduced in size since the end of the Cold War, and priority within the service is on counter-terrorism.

Yet there is plenty for Liz to do. In fact, there are more spies operating in London today than during the height of East-West hostilities. This includes Russian spies, who continue to operate in number. What's changed is their targets - now they spy on the international financial community that has made London its base in the last twenty years, as well as on the wealthy influential Russian 'oligarchs', many of whom have also come to London to live.

Liz learns of a Russian government plot to 'silence' one of these oligarchs, Nikita Brunovsky, who is an increasingly vocal opponent of the Putin regime. How he is to be kept quiet is unclear, but since the Foreign Office dread any kind of incident, Liz is assigned to keep it from happening.

Almost simultaneously, Liz and Peggy also learn of the presence of an Illegal Support officer in London, one Vladimir Rykov, who is putatively attached to the Russian embassy. An Illegal is someone who operates (often for many years) under a completely fabricated identity - and Rykov, it seem, has been sent to London to help an Illegal now based there.

To protect Brunovsky from his Kremlin foes, Liz goes undercover and joins the oligarch's retinue. As she tries to determine who around the Russian might be willing to betray him, she has to consider too whether this traitor may not also be the Illegal she and Peggy are seeking...

"Rimington's plot, as one should expect from a former head of MI5, bristles with subterfuge and splices in allusions to Litvinenko's poisoning to give Illegal Action a contemporary feel... Gripping... Carlyle, in her third outing, has depth and tenacity." (Financial Times)