Items related to The Victorians

Wilson, A. N. The Victorians 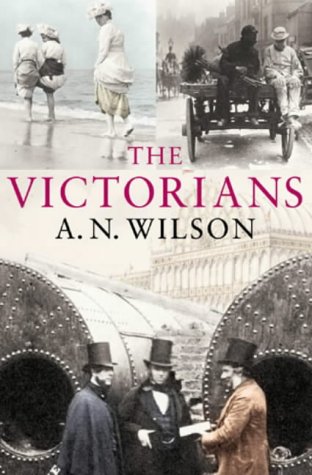 People, not abstract ideas, make history and in this volume A.N. Wilson has pieced together hundreds of different lives to tell a story - one that is still unfinished in our own day. Here are the poor and obscure as well as the lofty and famous - each in the very act of creating the Victorian age.

AN Wilson’s The Victorians is the longest and liveliest of the books which have appeared in the wake of the centenary of Victoria’s death. As one might expect, Wilson, Evening Standard columnist, novelist, and polemical biographer, has an eye for colourful detail, cannot resist gossip about the great and good, and smells out cant and hypocrisy at 10 paces. Familiar tales are told about the sexual proclivities, religious hypocrisies and gargantuan economic and imperial appetites of the Victorians. But the book is more than an exercise in debunking. Wilson sees 19th century Britons as the harbingers of modernity: the first society to grapple with and agonise over the Darwinian struggle of social mobility and industrial growth. He documents in detail the relentless drive for getting on, sympathises with its victims--in the English towns, the Irish bogs and on the Indian plains – and warms to the critical commentary of the chief sages and seers of the era: Carlyle, Dickens, and Manning. The intellectual set-pieces of the time--the Gothic revival, religion versus science, Anglo-Catholicism--are particularly well-handled.

As well as being its strengths, the author’s prejudices are at times the book’s weaknesses. Apart from Victoria’s Prime Ministers and the Irish nationalist leader, Parnell, Wilson doesn’t much like the politicians of the period (or the political economists), and these aspects of Victorian history get rather short shrift. And the narrative occasionally jumps and jars as he tries to include everything and anything (Dostoyevsky and Wagner wander in at one stage). But there is much to amuse and instruct throughout, and, just as important, not a little to argue with as well.--Miles Taylor

'... The Victorians is a magnificent achievement: plucky, engaged and full of awe at the way we continue to live out its inheritance today.' -- Kathryn Hughes, The Guardian, August 31, 2002

'... hugely enjoyable, and you will undoubtedly learn something interesting about your own relationship to the past while regarding it.' -- The Independent on Sunday, September 1, 2002

'I can't recall a history book furnishing so many laughs en route... The Victorians is a work of scholarship, a labour of love, a persusasive polemic.' -- John Sutherland, Mail on Sunday, September 8, 2002

'You really must read THE VICTORIANS by A.N. Wilson: a doorstopping study, engagingly conveyed by an enthusiast.' -- Sunday Times, September 1, 2002

The Victorians [Hardcover] Wilson, A. N.