Items related to The Long Patrol 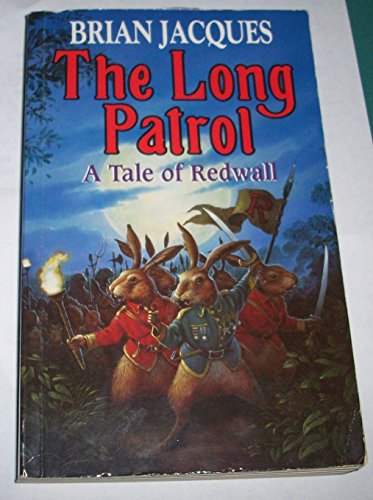 The Long Patrol -- that fighting unit of perilous hares -- is called out to draw off the murderous Rapscallion army, and fight them to the death if need be.

And the lead sword of the Long Patrol will be taken up by the young, inexperienced hare Tammo -- in one of the most ferocious battles Redwall has ever faced...

Brian Jacques has proved time and time again that he has the ability to grab his readers by the throat and transport them into a world of fantasy and adventure that many writers of adult books would love to emulate. The Long Patrol, A Tale of Redwall, certainly proves the point yet again, but distinguishes itself by being perhaps the very best of all the Redwall books so far. Relying less and less on the old, familiar Redwall characters and more and more on the ingenuity and passion of younger blood, The Long Patrol will certainly win Jacques a fresh following while continuing to delight his existing army of fans. (9 years and over) --Susan Harrison

Praise for the Redwall series

"Brian Jacques has the true fantasy writer's ability to create a wholly new and believable world." -School Library Journal "The medieval world of Redwall Abbey--where gallant mouse warriors triumph over evil invaders--has truly become the stuff of legend." -Seattle Post-Intelligencer "A grand adventure story. Once the reader is hooked, there is no peace until the final page." -Chicago Sun-Times "Jacques's effortless, fast-paced narrative gets its readers quickly hooked. He clearly loves this other world he has created--there's a genius sense of involvement and care (lots of lovingly descriptive passages), as well as an overflowing, driving imagination." -Birmingham Post "Redwall is both an incredible and ingratiating place, one to which readers will doubtless cheerfully return." -New York Times Book Review "An excellent adventure with an enlightened conscience. Brilliantly complex. With vibrant and distinct animal characters, Jacques's classically inspired plot-weaving achieves virtuosity." -Publishers Weekly "Only a churl would reject this morality play in fur." -Kirkus Reviews "Filled with the kind of vibrant storytelling that fans of Jacques have come to expect. His dialogue is lively and delightful to read aloud...so rich in detail that the sights and sounds and smells of the adventure pull the reader in." -Grand Rapids Press (MI) "A richly imagined world in which bloody battles vie for attention with copious feasting and tender romancing. Where males and females are heroes and warriors. Where the young triumph and the old endure. Where intelligence is as valued as strength and wit is frequently more important than size...[Jacques] continues to surprise and delight with intriguing plots and fresh faces." -Cincinnati Enquirer "The Knights of the Round Table with paws." -The Sunday Times (London)

Book Description Paperback. Condition: Good. The book has been read but remains in clean condition. All pages are intact and the cover is intact. Some minor wear to the spine. Seller Inventory # GOR006278810

Book Description Hutchinson, 1997. Paperback. Condition: Good. All orders are dispatched the following working day from our UK warehouse. Established in 2004, we have over 500,000 books in stock. No quibble refund if not completely satisfied. Seller Inventory # mon0004114783

Book Description Hutchinson 31/07/1997, 1997. Condition: Very Good. Shipped within 24 hours from our UK warehouse. Clean, undamaged book with no damage to pages and minimal wear to the cover. Spine still tight, in very good condition. Remember if you are not happy, you are covered by our 100% money back guarantee. Seller Inventory # 6545-9780091768201

Book Description Hutchinson, 1997. Paperback. Condition: Very Good. The Long Patrol This book is in very good condition and will be shipped within 24 hours of ordering. The cover may have some limited signs of wear but the pages are clean, intact and the spine remains undamaged. This book has clearly been well maintained and looked after thus far. Money back guarantee if you are not satisfied. See all our books here, order more than 1 book and get discounted shipping. . Seller Inventory # 7719-9780091768201