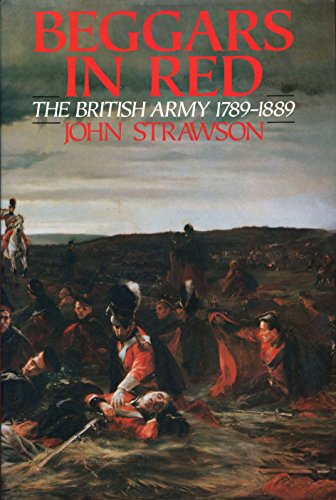 This was a period in which the British Army did much to astonish the world indulging in spectacular triumphs as well as distrastrous defeats. The story encompasses the final despatch of history's greatest soldier - Napoleon - and the subjugation of Asian and African potentates. It was the century which saw the British tighten their hold on India, extend their Imperial possessions largely by the sword, and at length - despite blunders in the Crimea and mutiny in the Indian Army - establish a peace-keeping cordon around the globe. John Strawson presents a compelling account of Kipling's "Beggars in Red", at first, struggling in vain against French revolutionary armies and its own government's neglect then, with the Duke of York's reforms plus the fine leadership of Sir John Moore and Wellington, gaining skill and confidence, winning battle after battle in the Peninsular and at Waterloo. At a time when reductions in the army seem imminent, Strawson reminds us that the British regimental system is priceless and indispensable.

John Strawson enjoyed a distinguished military career, reaching the rank of major- general and being appointed Chief-of-Staff to SHAPE. He is one of Britain's most brilliant - and accurate - military analysts and is the author of many books including Hitler as Military Commander and Gentlemen in Khaki.

Book Description Hutchinson, 1991. Condition: Good. This is an ex-library book and may have the usual library/used-book markings inside.This book has hardback covers. In good all round condition. Dust Jacket in good condition. Please note the Image in this listing is a stock photo and may not match the covers of the actual item,700grams, ISBN:9780091747466. Seller Inventory # 8502320

Book Description Paperback. Condition: Very Good. The book has been read, but is in excellent condition. Pages are intact and not marred by notes or highlighting. The spine remains undamaged. Seller Inventory # GOR002713322

Book Description Hutchinson 01/01/1991, 1991. Condition: Very Good. Shipped within 24 hours from our UK warehouse. Clean, undamaged book with no damage to pages and minimal wear to the cover. Spine still tight, in very good condition. Remember if you are not happy, you are covered by our 100% money back guarantee. Seller Inventory # 6545-9780091747466

Book Description Hutchinson 01/01/1991, 1991. Condition: Very Good. This book is in very good condition and will be shipped within 24 hours of ordering. The cover may have some limited signs of wear but the pages are clean, intact and the spine remains undamaged. This book has clearly been well maintained and looked after thus far. Money back guarantee if you are not satisfied. See all our books here, order more than 1 book and get discounted shipping. . Seller Inventory # 7719-9780091747466