Items related to What is Sociology? (University Library)

What is Sociology? (University Library) 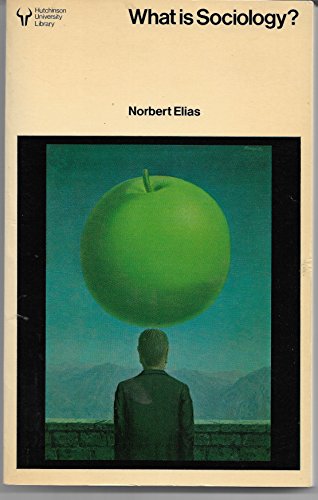 'The enterprise of publishing the collected works of Norbert Elias under the editorship of Richard Kilminster and Stephen Mennell by University College Dublin Press is an extremely important contribution to the contemporary intellectual and academic scene. Norbert Elias was one of the most original minds in the human and social sciences in the 20th century - his work covers not only a very broad range of sociological topics starting with his classical The Civilising Process and later The Court Society, but also many topics ranging from sociology of knowledge to sociology of sport and analysis of historical processes; the broad philosophical problems, such as the idea of the place of the progress of symbolic dimensions in social life. This is really a monumental enterprise, very worthwhile and very constructive, presenting a great challenge to the contemporary intellectual and academic scene - and UCD Press should be congratulated in undertaking this enterprise.' S. N. Eisenstadt Jerusalem, 24 July 2008 'Too easily the editors and readers of Books Ireland take it as given that Irish publishers' books are mostly about Ireland or by Irish writers. We wish it were not so because we think our publishers are of world class, and a shining exception and exemplar is this series of eighteen volumes of the life's work in English - some of his work was written in German - of Elias (1897 - 1990) whose major theme was the theory of civilising processes - Norbert is very interesting on the subject as well as on the dynamics of sports, social (and especially male) bonding, violence and football hooliganism. These books are in the very best tradition of design, with acid-free paper, sewn bindings, cloth boards, coloured endpapers, spine labels and acetate jackets.' Books Ireland Nov 2008 'There will be eighteen volumes in this handsome uniform series, the last being a full index to the others, while a supplementary volume has been included, Elias's work on the origin of the naval profession. Elias was one of the most important European thinkers on sociology in the 20th century. He wrote in English and German on all aspects of sociology such as the origin of civilisation, the place of individuals in society, music, sport and the sciences. In this volume he examines the growth of knowledge in modern Europe and kore specifically the development of scientific thinking. He considers too the idea of Utopia, as first expressed by Thomas More and the developed by other scientific and social thinkers, as a means of studying social development. The book is introduced with a biographical essay on Norbert Elias and a longer essay on the text used in this volume.' Books Ireland Dec 2009 'The Collected Works of Norbert Elias that is being published by University College Dublin Press. Eighteen volumes are planned. The production is exemplary, from binding and paper quality through the editorial care. Earlier translations have been corrected and changes noted; editors' notes explain circumstances within which Elias wrote and clarify references he makes to lesser known authors and contemporary events.' Canadian Journal of Sociology 35(4) 2010

NORBERT ELIAS (1897-1990) was one of the greatest sociologists of the twentieth century. He studied in Breslau and Heidelberg and served as Karl Mannheim's assistant in Frankfurt. In exile after 1933, first in France and then in Britain, he wrote his magnum opus On the Process of Civilisation. His whole oeuvre is now appearing in new scholarly editions in the Collected Works in English. Artur Bogner, University of Bayreuth, is a specialist on social development and armed conflicts; Katie Liston is Lecturer in the Sociology of Sport, University of Ulster; Stephen Mennell is Professor Emeritus of Sociology, UCD, a member of the Board of the Norbert Elias Foundation, Amsterdam, and General Editor of the Collected Works.

2. What is Sociology? (University Library)

Book Description Paperback. Condition: Very Good. The book has been read, but is in excellent condition. Pages are intact and not marred by notes or highlighting. The spine remains undamaged. Seller Inventory # GOR004116264

3. What is Sociology? (University Library)

Book Description Paperback. Condition: Fair. A readable copy of the book which may include some defects such as highlighting and notes. Cover and pages may be creased and show discolouration. Seller Inventory # GOR003483512