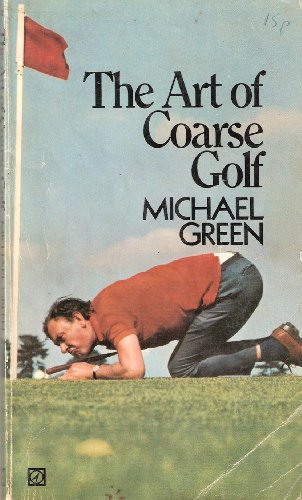 Easy to recognize, but dangerous to approach too closely, the coarse golfer is the one who normally goes from tee to green without touching the fairway... the one who has to shout 'Fore' when he putts. This book will delight aficionados everywhere.

"'It's hard to know which to admire more: Mr Green's fund of anecdotes, or his cheerful advice on how to get by, if not on top, without really trying.' Sunday Times"

Michael Green's books can be considered contemporary classics - his devastating advice on a wide range of activities from acting to Rugby Union has established The Art of Course as part of the language. The series has sold over a million copies around the world, been translated into several languages, and adapted for the stage and television. John Jenson was born in Australia, the son of an artist. He has been the regular political cartoonist for the Sunday Telegraph, and frequently contributed to Punch.

Book Description Paperback. Condition: Fair. A readable copy of the book which may include some defects such as highlighting and notes. Cover and pages may be creased and show discolouration. Seller Inventory # GOR002447521

The Art of Coarse Golf

Book Description Condition: Good. Ships from the UK. Former library book; may include library markings. Used book that is in clean, average condition without any missing pages. Seller Inventory # 40395082-20

Book Description Paperback. Condition: Used; Good. **Simply Brit** Shipped with Premium postal service within 24 hours from the UK with impressive delivery time. We have dispatched from our book depository; items of good condition to over ten million satisfied customers worldwide. We are committed to providing you with reliable and efficient service at all times. Seller Inventory # mon0001650222