Items related to Fundamentals of Marketing 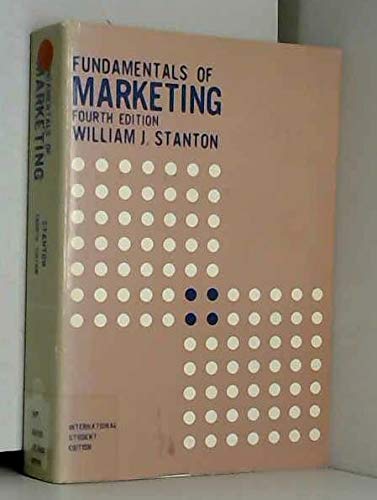 The new Fundamentals of Marketing package offers complete text and digital solutions to provide the flexibility you want - at a price your students can afford.

William J. Stanton is professor emeritus of marketing at the University of Colorado-Boulder. He received his PhD in marketing from Northwestern University, where he was elected to Beta Gamma Sigma. He has worked in business and has taught in several management development programs for marketing executives. He has served as a consultant for various business organizations and has engaged in research projects for the federal government. Professor Stanton also has lectured at universities in Europe, Asia, Mexico, and New Zealand. A coauthor of the leading text in sales management, Professor Stanton has also published several journal articles and monographs. Marketing has been translated into Spanish, and separate editions have been adapted (with coauthors) for Canada, Italy, Australia, and South Africa. In a survey of marketing educators, Professor Stanton was voted one of the leaders in marketing thought. And he is listed in Who's Who in America and Who's Who in the World.