Items related to British English, A to Zed

British English, A to Zed 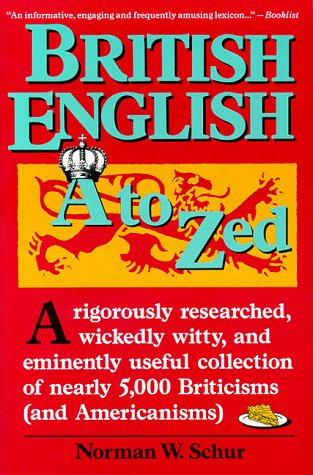 The late Norman W. Schur wrote several books on language and divided his time between England and the United States. Eugene Ehrlich is coeditor of the Oxford American Dictionary and the author of numerous books on language, including You've Got Ketchup on Your Muumuu: An A to Z Guide to English Words from Around the World; The Highly Selective Dictionary for the Extraordinarily Literate; and Veni, Vidi, Vici: Conquer Your Enemies, Impress Your Friends with Everyday Latin. A former Senior lecturer of English at Columbia University, he lives in Mamaroneck, NY. Richard Ehrlich is an American writer living in London. He has written regular columns for some of Britain's best-known national newspapers, including The Guardian, The Independent on Sunday, and the Financial Times. He has also published work in numerous magazines, written five books, and appeared on BBC Radio several times.

1. British English A to Zed