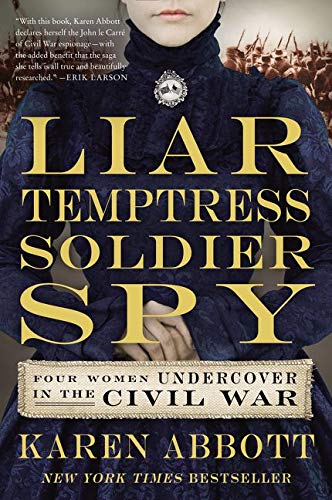 "Karen Abbott's Liar, Temptress, Soldier, Spy...is full of so many titillating dramas and details, you could be forgiven for periodically checking the back of the book to make sure it's nonfiction."--Christian Science Monitor

"Abbott's prose is vivid, especially when she writes about battles and the terrible costs they exact."--Washington Post

"Karen Abbott's powerful narrative is first rate American history about a fascinating, little-known chapter of the Civil War, as well as a compulsive, thrilling saga of espionage. Brilliant storytelling, highly accessible, and impossible to put down."--Gilbert King, Pulitzer Prize-winning author of Devil in the Grove

"Abbott...[reveals] in such vivid detail the extraordinary lives of women who involved themselves so dangerously in the Civil War. This is that rare work of history that reads like a novel -- and a really good one at that -- and in which the truth is more thrilling than fiction. "--Michael Korda, NY Times bestselling biographer of Dwight D. Eisenhower, Ulysses S. Grant, and T. E. Lawrence

Thrilling, illuminating, heart-pounding. Liar, Temptress, Solider, Spy reads like a crackling espionage novel...Karen Abbott brings to vivid life four of extraordinary and audacious women, and runs glorious roughshod over all our traditional notions of the role of women in the Civil War.--Megan Abbott, Edgar-award winning and New York Times bestselling author of Dare Me and The Fever

"Karen Abbott's Liar, Temptress, Soldier, Spy is the kind of page-turning book you can get so absorbed in that you keep forgetting it's nonfiction."--Bustle.com

"Not for nothing has Abbott been called a 'pioneer of sizzle history.' Here she creates a gripping page-turner that moves at a breathtaking clip through the dramatic events of the Civil War."--Los Angeles Times

Seventeen-year-old Belle Boyd, an avowed rebel with a dangerous temper, shot a Union soldier in her home, and became a courier and spy for the Confederate army, using her considerable charms to seduce men on both sides. Emma Edmonds disguised herself as a man to enlist as a Union private named Frank Thompson, witnessing the bloodiest battles of the war and infiltrating enemy lines. The beautiful widow Rose O'Neal Greenhow engaged in affairs with powerful Northern politicians and used her young daughter to send information to Southern generals. Elizabeth Van Lew, a wealthy Richmond abolitionist, hid behind her proper Southern manners as she orchestrated a far-reaching espionage ring--even placing a former slave inside the Confederate White House--right under the noses of increasingly suspicious rebel detectives.