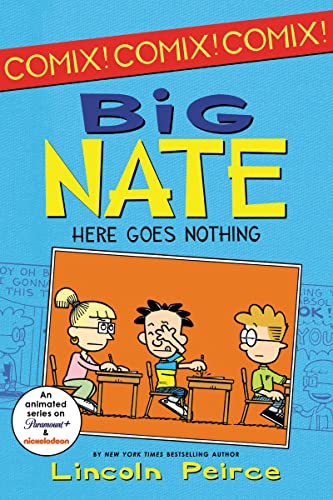 Big Nate is the star of his own comic strip! Check out 300 black-and-white comic strips never before published together in this awesome comic compilation in the New York Times bestselling series by Lincoln Peirce! Includes all new Big Nate activities in the back!

Lincoln Peirce (pronounced "purse") is a cartoonist/writer and New York Times bestselling author of the hilarious Big Nate book series (www.bignatebooks.com), now published in twenty-five countries worldwide and available as ebooks and audiobooks and as an app, Big Nate: Comix by U! He is also the creator of the comic strip Big Nate. It appears in over three hundred U.S. newspapers and online daily at www.gocomics.com/bignate. Lincoln's boyhood idol was Charles Schulz of Peanuts fame, but his main inspiration for Big Nate has always been his own experience as a sixth grader. Just like Nate, Lincoln loves comics, ice hockey, and Cheez Doodles (and dislikes cats, figure skating, and egg salad). His Big Nate books have been featured on Good Morning America and in the Boston Globe, the Los Angeles Times, USA Today, and the Washington Post. He has also written for Cartoon Network and Nickelodeon. Lincoln lives with his wife and two children in Portland, Maine.

Book Description Paperback. Condition: New. Paperback. Big Nate is the bestNate's not only the star of his own comic strip?he's the star goalie of his school soccer teamWill Nate defend his goal and save the day? Or will Jeffer.Shipping may be from multiple locations in the US or from the UK, depending on stock availability. 215 pages. 0.299. Seller Inventory # 9780062086969