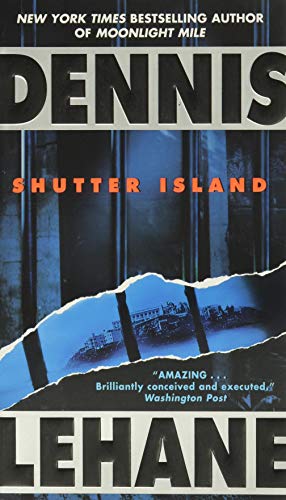 The basis for the blockbuster motion picture directed by Martin Scorsese and starring Leonardo DiCaprio, Shutter Island by New York Times bestselling author Dennis Lehane is a gripping and atmospheric psychological thriller where nothing is quite what it seems. The New York Times calls Shutter Island, "Startlingly original." The Washington Post raves, "Brilliantly conceived and executed." A masterwork of suspense and surprise from the author of Mystic River and Gone, Baby, Gone, Shutter Island carries the reader into a nightmare world of madness, mind control, and CIA Cold War paranoia and is unlike anything you've ever read before.

Shutter Island is something of a departure for Dennis Lehane. It is not like the private eye novels with which he made his name and it is not especially like Mystic River, his distinguished crime novel about murder, loyalty and revenge. Instead, he gives us a classic of psychological suspense--US Marshal Teddy is summoned to a remote hospital for the criminally insane to look for a missing patient and finds his own future and sanity on the line. It is the 1950s and experiments with drugs, conditioning and brain surgery are all the rage both in the psychiatric profession and in the shadow world of government agencies.

Teddy rapidly becomes aware that no-one he is talking to is remotely telling him the truth and that he cannot be wholly sure even of his charming new partner. As the island hospital is isolated by a hurricane, we find ourselves unable to trust a single thing that the narrative tells us--Lehane displays a gift for sleight of hand which is showily disorienting. At the same time, this is not just a box of tricks. We find ourselves caring deeply for Teddy and his partner Chuck, whatever is going on and whoever they really are.--Roz Kaveney

"The ride this novel provides is as good as entertainment gets."--Miami Herald

"Startlingly original...instantly cinematic... unfolds with increasing urgency until it delivers a visceral shock in its final moments."--New York Times

"Fasten your seat belts for a bumpy, breakneck ride...utterly absorbing... is an express train with no local stops...engrossing."--Boston Globe

"A lollapalooza of a corkscrew thriller...sure to be the most talked-about thriller of the year."--Kirkus Reviews, starred review

"Combines the claustrophobia of . . . Agatha Christie . . . with the creepiness of a good Stephen King yarn. . . . Good luck putting this one down.--San Francisco Chronicle Book Review

"Nightmarish...it's not a book to start before bedtime. Even if you finish before dawn, Shutter Island will trouble your sleep."--Orlando Sentinel

"There is no mystery...about how good this book is; like Mystic River, it's a tour de force."--Publishers Weekly (starred review)

Book Description Mass Market Paperback. Condition: New. Mass Market Paperback. The basis for the blockbuster motion picture directed by Martin Scorsese and starring Leonardo DiCaprio, Shutter Island by New York Times bestselling author Dennis Lehane is a .Shipping may be from multiple locations in the US or from the UK, depending on stock availability. 416 pages. 0.230. Seller Inventory # 9780062068415