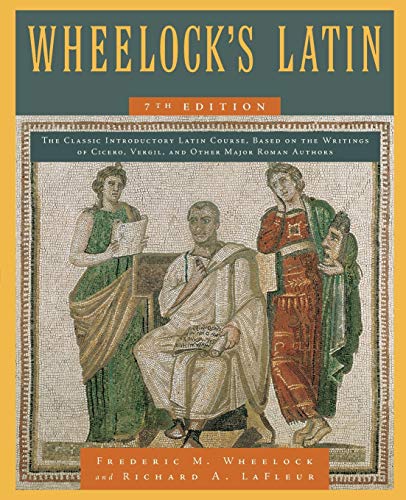 Generations of students have learned Latin with this classic introductory textbook that remains the most highly regarded and bestselling single-volume of its kind.

Wheelock’s Latin 7th Edition retains its signature core of authentic Latin readings—curated from the works of Cicero, Vergil, and other major Roman authors of classical literature, drama, and poetry, as well as inscriptions, artifacts, and even authentic graffiti—that demonstrate the ancient Romans’ everyday use of Latin: Latin as a living language.

With expanded English-Latin/Latin-English vocabulary sections, tightly retooled comprehension and discussion questions, self-tutorial exercises, translation tips, etymological aids, maps, and dozens of photos and illustrations that capture aspects of classical culture and mythology, Wheelock’s Latin 7th Edition is the essential resource for students beginning their journey into the heart of the classical world.

Frederic M. Wheelock (1902-1987) received the A.B., A.M., and Ph.D. degrees from Harvard University. His long and distinguished teaching career included appointments at Haverford College, Harvard University, the College of the City of New York, Brooklyn College, Cazenovia Junior College (where he served as Dean), the Darrow School for Boys (New Lebanon, NY), the University of Toledo (from which he retired as full Professor in 1968), and a visiting professorship at Florida Presbyterian (now Eckert) College. He published a number of articles and reviews in the fields of textual criticism, palaeography, and the study of Latin; in addition to Wheelock's Latin (previously titled Latin: An Introductory Course Based on Ancient Authors), his books include Latin Literature: A Book of Readings and Quintilian as Educator (trans. H. E. Butler; introd. and notes by Prof. Wheelock). Professor Wheelock was a member of the American Classical League, the American Philological Association, and the Classical Association of the Atlantic States.

When Professor Frederic M. Wheelock's Latin first appeared in 1956, the reviews extolled its thoroughness, organization, and conciseness; one reviewer predicted that the book "might well become the standard text" for introducing students to elementary Latin. Now, nearly six decades later, that prediction has certainly proved accurate.

This new edition of Wheelock's Latin has all of the features, many of them improved and expanded, that have made it the bestselling single-volume beginning Latin textbook:

Also included are expanded notes on the literary passages, comments on vocabulary, and translation tips; new comprehension and discussion questions; and new authentic classical Latin readings, including Roman graffiti, in every chapter.