Items related to Freakonomics: A Rogue Economist Explores the Hidden...

Levitt, Steven D. Freakonomics: A Rogue Economist Explores the Hidden Side of Everything

Freakonomics: A Rogue Economist Explores the Hidden Side of Everything 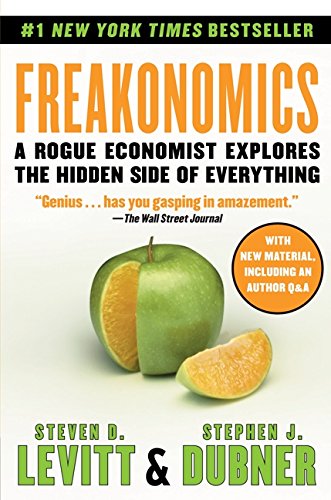 Which is more dangerous, a gun or a swimming pool? Which should be feared more: snakes or french fries? Who really deserves credit for the recent drop in crime? In this groundbreaking book, leading economist Steven Levitt--Professor of Economics at the University of Chicago and winner of the American Economic Association's 2004 John Bates Clark medal for the economist under 40 who has made the greatest contribution to the discipline--reveals that the answers to such questions lie in economic theory, a field he is revolutionizing. Joined by acclaimed author Stephen J. Dubner, Levitt offers his most compelling ideas as he explores the basic questions of everyday life, reaching conclusions that have turned conventional wisdom on its head.

Brilliantly reasoned, told in compelling, forthright language, and filled with keen insight, What Do Schoolteachers and Sumo Wrestlers Have in Common? remind us that economics is ultimately the study of incentives and competition--how people get what they want, or need, when others want or need the same thing.

"If Indiana Jones were an economist, he'd be Steven Levitt... Criticizing Freakonomics would be like criticizing a hot fudge sundae."--Wall Street Journal

"Steven Levitt has the most interesting mind in America... Prepare to be dazzled."--Malcolm Gladwell, author of Blink and The Tipping Point

"Levitt is one of the most notorious economists of our age."--Financial Times

"Freakonomics is politically incorrect in the best, most essential way.... This is bracing fun of the highest order."--Kurt Andersen, host of public radio's Studio 360 and author of Turn of the Century

"An eye-opening, and most interesting, approach to the world."--Kirkus Reviews

"A showcase for Levitt's intriguing explorations into a number of disparate topics.... There's plenty of fun to be had."--Salon.com

"One of the decade's most intelligent and provocative books."--The Daily Standard

"An easy, funny read. Many unsolvable problems the Americans have could be solved with simple means."--Business World

Which is more dangerous, a gun or a swimming pool?
What do schoolteachers and sumo wrestlers have in common?
How much do parents really matter?

These may not sound like typical questions for an economist to ask. But Steven D. Levitt is not a typical economist. He studies the riddles of everyday life--from cheating and crime to parenting and sports--and reaches conclusions that turn conventional wisdom on its head. Freakonomics is a groundbreaking collaboration between Levitt and Stephen J. Dubner, an award-winning author and journalist. They set out to explore the inner workings of a crack gang, the truth about real estate agents, the secrets of the Ku Klux Klan, and much more. Through forceful storytelling and wry insight, they show that economics is, at root, the study of incentives--how people get what they want or need, especially when other people want or need the same thing.

2. Freakonomics: A Rogue Economist Explores the Hidden Side of Everything (Paperback)

5. Freakonomics: A Rogue Economist Explores the Hidden Side of Everything