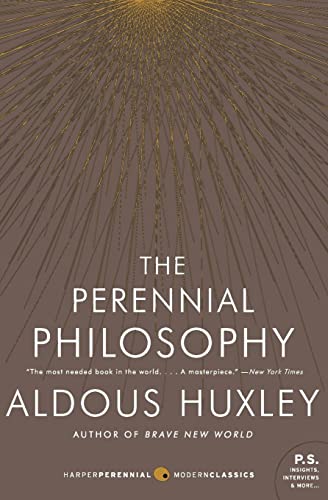 Aldous Huxley (1894-1963) is the author of the classic novels Brave New World, Island, Eyeless in Gaza, and The Genius and the Goddess, as well as such critically acclaimed nonfiction works as The Perennial Philosophy and The Doors of Perception. Born in Surrey, England, and educated at Oxford, he died in Los Angeles, California.

3. The Perennial Philosophy (Paperback or Softback)

Book Description HarperCollins Publishers Inc, United States, 2010. Paperback. Condition: New. Language: English. Brand new Book. An inspired gathering of religious writings that reveals the divine reality common to all faiths, collected by Aldous HuxleyThe Perennial Philosophy, Aldous Huxley writes, may be found among the traditional lore of peoples in every region of the world, and in its fully developed forms it has a place in every one of the higher religions. With great wit and stunning intellect--drawing on a diverse array of faiths, including Zen Buddhism, Hinduism, Taoism, Christian mysticism, and Islam--Huxley examines the spiritual beliefs of various religious traditions and explains how they are united by a common human yearning to experience the divine. The Perennial Philosophy includes selections from Meister Eckhart, Rumi, and Lao Tzu, as well as the Bhagavad Gita, Tibetan Book of the Dead, Diamond Sutra, and Upanishads, among many others. Seller Inventory # ABZ9780061724947

Book Description Harper Perennial Modern Classics, 2009. Paperback. Condition: New. Paperback. An inspired gathering of religious writings that reveals the "divine reality" common to all faiths, collected by Aldous Huxley"The Perennial Philosophy," Aldous Huxley .Shipping may be from multiple locations in the US or from the UK, depending on stock availability. 312 pages. 0.270. Seller Inventory # 9780061724947