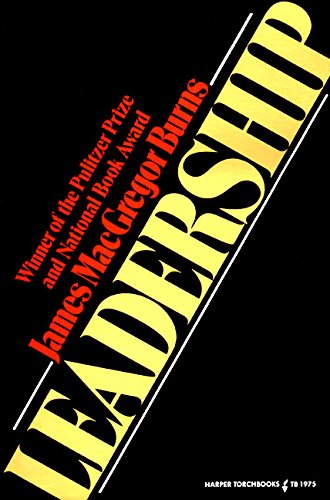 "To some historians Professor Burns is a fine political scientist. To some political scientists he is a fine historian. In fact, he is the best of both disciplines.... Many other writers throughout history have analyzed leadership. What is impressive about this new study is the range of Burns' reading about both Western and non-Western civilizations, his freedom from cultural bias, the insights he derives from his own observation of and participation in American politics, and his willingness to grow intellectually.”
—Washington Post

The landmark study of leadership, which introduced the concept of “transformational leadership,” now with a new preface on leading in the 21st century by its Pulitzer Prize-winning author, James MacGregor Burns. Leadership is a “seminal book on power” (New York Times) written by “a landmark historian” (Newsweek).

“Pulitzer prizewinner James MacGregor Burns introduced the concept of transformational leadership in his book Leadership. For him, it characterized the great leaders of history.” (Management Today)

“One of the most influential leadership authorities, James MacGregor Burns advanced the concept of ‘transformational leadership,’ whereby leaders have the ability and obligation to share an overarching vision with their followers.” (Boston Globe)

“Leadership, remains a classic in the field. Burns has spent a lifetime studying presidential leadership.” (MARGARET WARNER, The NewsHour with Jim Lehrer)

James MacGregor Burns (1918-2014) received his doctorate in political science from Harvard. In 1971, Burns won the Pulitzer Prize and the National Book Award for his biography Roosevelt: Soldier of Freedom. He was a former president of the American Political Science Association, a member of the American Academy of Arts and Sciences, and served as Distinguished Leadership Scholar at the Academy of Leadership that bears his name at the School of Public Policy at the University of Maryland.