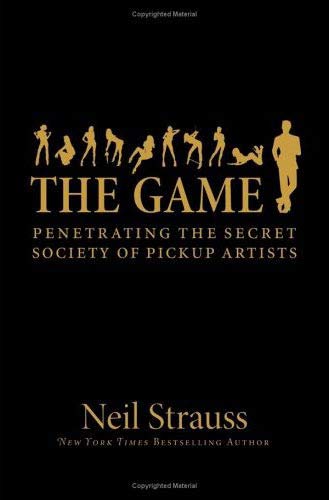 Hidden somewhere, in nearly every major city in the world, is an underground seduction lair. And in these lairs, men trade the most devastatingly effective techniques ever invented to charm women. This is not fiction. These men really exist. They live together in houses known as Projects. And Neil Strauss, the bestselling author, spent two years living among them, using the pseudonym Style to protect his real-life identity. The result is one of the most explosive and controversial books of the year -- guaranteed to change the lives of men and transform the way women understand the opposite sex forever.

On his journey from AFC (average frustrated chump) to PUA (pick-up artist) to PUG (pick-up guru), Strauss not only shares scores of original seduction techniques but also has unforgettable encounters with the likes of Tom Cruise, Britney Spears, Paris Hilton, Heidi Fleiss, and Courtney Love. And then things really start to get strange -- and passions lead to betrayals lead to violence. The Game is the story of one man's transformation from frog to prince -- to prisoner in the most unforgettable book of the year.

Is it for real? Is The Game by Neill Strauss an assiduously detailed, highly entertaining exposé of a fascinating secret society -- the international community of pickup artists who have refined their talents for getting women into bed to the nth degree? Or is it an extremely funny hoax? Early drafts of the book had people wondering, and men in particular speculated if the book would deliver some valuable ‘how to’ tips as an aid to entering a sexual wonderland. In fact, it doesn't really matter whether you take the basic premise seriously or not: Strauss’ wonderfully diverting book delivers great entertainment whatever your point of view.

According to Strauss, the clandestine society of men he describes here take wagers in clubs and bars throughout the Western world over just who can chalk up the most Casanova-like quantities of pickups and seductions. But this isn't merely for the thrill of an army of sexual conquests -- all of this is coded and organised according to an almost military-style ritual, with an elaborate series of rules and regulations that the participants rigorously follow. Strauss went undercover in this glamorous world, and learned the secrets of these top-drawer seducers. But, for him, there was a useful corollary affect: Strauss found himself transformed from a nerdish, unconfident journalist into a silver-tongued Lothario, quite the equal of many of the ladykilling males he had been enjoying the company of. For him, the ultimate accolade was being noted The World's Number One Pickup Artist -- and then he made the mistake of setting his sights on a woman who could give every bit as good as she got.

The world of excess presented here is not one most of us move in, but (if the truth were told) it has its irresistible attractions. Strauss wheels in such celebrities as Tom Cruise and Courtney Love, and this unblushing peek into a secret world where sex and seduction are treated with cool scientific detachment is mesmerisingly readable. --Barry Forshaw

"Strauss is either a sex god or the anti-Christ, depending on your perspective."--The Daily Express

"Neil Strauss has it all figured out. When it comes to the mating dance, Strauss knows how to lead."--Chicago Sun-Times

"To call it a book would be an understatement. I prefer to think of it as the Bible."--The Sunday Mercury

"an engaging and hilarious read...empowering."--Pop Matters

"The funniest book I have read all year."--Tony Parsons

"Probably the most important self-help book you'll ever read."--Sunday Sport

Book Description Paperback. Condition: New. Language: English. Brand new Book. "The Game" recounts the incredible adventures of an everyday man who transforms himself from a shy, awkward writer into the quick-witted, smooth-talking Style, a character irresistible to women. But just when life is better than he could have ever dreamed (he uses his techniques on Britney Spears, receives life coaching from Tom Cruise, moves into a mansion with Courtney Love and is officially voted the World's Number One Pickup Artist) he falls head over heels for a woman who can beat him at his own game. Seller Inventory # LIB9780061240164

Game, The - Penetrating the Secret Society of Pickup Artists