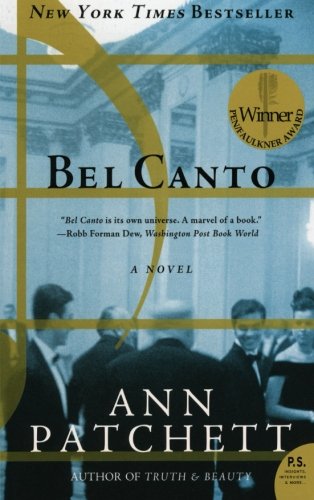 "Bel Canto...should be on the list of every literate music lover. The story is riveting, the participants breathe and feel and are alive, and throughout this elegantly-told novel, music pours forth so splendidly that the reader hears it and is overwhelmed by its beauty." --Lloyd Moss, WXQR

Ann Patchett's award winning, New York Times bestselling Bel Canto balances themes of love and crisis as disparate characters learn that music is their only common language. As in Patchett's other novels, including Truth & Beauty and The Magician's Assistant, the author's lyrical prose and lucid imagination make Bel Canto a captivating story of strength and frailty, love and imprisonment, and an inspiring tale of transcendent romance.

In Ann Patchett's Bel Canto, an unnamed South American country, a world-renowned soprano sings at a birthday party in honour of a visiting Japanese industrial titan. Alas, in the opening sequence, just as the accompanist kisses the soprano, a ragtag band of 18 terrorists enters the vice-presidential mansion through the air-conditioning ducts. Their quarry is the president, who has unfortunately stayed home to watch a favourite soap opera--and thus, from the beginning, things go awry.

Among the hostages are not only Hosokawa and Roxanne Coss, the American soprano, but an assortment of Russian, Italian and French diplomats. A Swiss Red Cross negotiator named Joachim Messner is roped into service while on holiday. He comes and goes, wrangling over terms and demands, and the days stretch into weeks, the weeks into months.

With the omniscience of magic realism, Ann Patchett flits in and out of the hearts and psyches of hostage and terrorist alike, and in doing so reveals a profound, shared humanity. Her voice is suitably lyrical, melodic, full of warmth and compassion. Hearing opera sung live for the first time, a young priest reflects:

Never had he thought, never once, that such a woman existed, one who stood so close to God that God's own voice poured from her. How far she must have gone inside herself to call up that voice. It was as if the voice came from the centre part of the earth and by the sheer effort and diligence of her will she had pulled it up through the dirt and rock and through the floorboards of the house, up into her feet, where it pulled through her, reaching, lifting, warmed by her, and then out of the white lily of her throat and straight to God in heaven.

Joined by no common language except music, the 58 international hostages and their captors forge unexpected bonds. Ultimately, of course, something has to give, even in a novel so imbued with the rich imaginative potential of magic realism. But in a fractious world, Bel Canto remains a gentle reminder of the transcendence of beauty and love. --Victoria Jenkins, Amazon.com Review:

‘A beguiling mix of thriller, romantic comedy, and novel of ideas...Crisply written, immaculately plotted, and often very funny, it is that rarity – a literary novel you simply can’t put down.’ The Times

‘Like the blueprint of operatic performance that she has imported, Patchett slides from strutting camp to high tragedy, minute social comedy to sublime romanticism.’ Alex Clark, The Guardian

‘Expect miracles when you read Ann Patchett’s fiction. Comparisons are tempting to the unabashed romanticism of Laurie Colwin, the eccentric characters of Anne Tyler, the enchantments of Alice Hoffman. But Patchett is unique; a generous, fearless and startlingly wise young writer.’
New York Times Review of Books

‘A fantastically gripping novel of romance under unexpected conditions.’ Cosmopolitan

Book Description Paperback. Condition: New. Language: English. Brand new Book. Winner of the PEN/Faulkner Award - Winner of the Orange Prize - National Book Critics Circle Award FinalistBel Canto is its own universe. A marvel of a book. --Washington Post Book WorldNew York Times bestselling author Ann Patchett's spellbinding novel about love and opera, and the unifying ways people learn to communicate across cultural barriers in times of crisisSomewhere in South America, at the home of the country's vice president, a lavish birthday party is being held in honor of the powerful businessman Mr. Hosokawa. Roxanne Coss, opera's most revered soprano, has mesmerized the international guests with her singing. It is a perfect evening--until a band of gun-wielding terrorists takes the entire party hostage. But what begins as a panicked, life-threatening scenario slowly evolves into something quite different, a moment of great beauty, as terrorists and hostages forge unexpected bonds and people from different continents become compatriots, intimate friends, and lovers.Patchett's lyrical prose and lucid imagination make Bel Canto a captivating story of strength and frailty, love and imprisonment, and an inspiring tale of transcendent romance. Seller Inventory # ABZ9780060838720