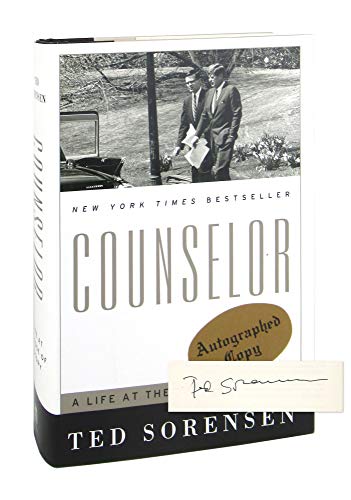 In this gripping memoir, John F. Kennedy's closest advisor recounts in full for the first time his experience counseling Kennedy through the most dramatic moments in American history.

Sorensen returns to January 1953, when he and the freshman senator from Massachusetts began their extraordinary professional and personal relationship. Rising from legislative assistant to speechwriter and advisor, the young lawyer from Nebraska worked closely with JFK on his most important speeches, as well as his book Profiles in Courage. Sorensen encouraged the junior senator's political ambitions—from a failed bid for the vice presidential nomination in 1956 to the successful presidential campaign in 1960, after which he was named Special Counsel to the President.

Sorensen describes in thrilling detail his experience advising JFK during some of the most crucial days of his presidency, from the decision to go to the moon to the Cuban Missile Crisis, when JFK requested that the thirty-four-year-old Sorensen draft the key letter to Khrushchev at the most critical point of the world's first nuclear confrontation. After Kennedy was assassinated, Sorensen stayed with President Johnson for a few months before leaving to write a biography of JFK. In 1968 he returned to Washington to help run Robert Kennedy's presidential campaign. Through it all, Sorensen never lost sight of the ideals that brought him to Washington and to the White House, working tirelessly to promote and defend free, peaceful societies.

Illuminating, revelatory, and utterly compelling, Counselor is the brilliant, long-awaited memoir from the remarkable man who shaped the presidency and the legacy of one of the greatest leaders America has ever known.

“This is an important book, and it’s also a poignant one. As Jackie Kennedy once said of a speech that Ted Sorensen gave about her husband, it captures not only the soul of John Kennedy but also the soul of Sorensen. This clear-eyed but loving memoir is fascinating.” (Walter Isaacson)

“Ted Sorensen’s Counselor is that rare gift to history: an account of mighty events by a participant who stood at their heart, and a writer masterful enough to make us understand them as well.” (Robert Caro)

“Ted Sorensen’s words inspired a generation, and his counsel and judgment helped steer our nation through some of its most difficult hours. This gripping, candid memoir illuminates a revered era in American history. Sorensen has written a book that will be cherished for generations.” (Barack Obama)

“Ted Sorensen has given us a very welcome up close and personal view of life and politics at the side of John F. Kennedy. There are fresh insights and enduring lessons for this and future generations to study and embrace. And painful memories of what we lost.” (Tom Brokaw)

“With eloquence and honesty, Sorensen takes us on a tour of many of the most important moments of the second half of the American Century, from who wrote ‘Profiles in Courage’ to the Cuban Missile Crisis to Dallas and its terrible aftermath. This is an illuminating and engaging book.” (Jon Meacham)

In January 1953, the newly-elected Senator John F. Kennedy hired a young Nebraskan lawyer named, Theodore Sorensen as his legislative assistant. Sorensen quickly rose up the ranks in JFK's senate office, from research aide to speechwriter to campaigner and advisor, eventually working closely with JFK on his speeches and books, including "Profiles in Courage", and encouraging JFK's interest in the vice presidential nomination. Though JFK's pursuit of that nomination fell short at the 1956 Democratic Convention, he had emerged as a prominent national figure; and JFK and Sorensen traveled over the next three years to all fifty states exploring his prospects for the presidential nomination in 1960.Upon his election, Kennedy appointed Sorensen as his Special Counsel, a role that allowed him to serve as the President's own lawyer, speechwriter, and trusted confidante. Sorensen recounts in thrilling detail his experience advising JFK through some of the most dramatic moments in American history, including the Bay of Pigs and the Cuban Missile Crisis, when JFK requested that Sorensen draft a letter to Khrushchev at the most critical point of the world's first nuclear confrontation.

Sorensen was immersed in everything from civil rights to the decision to go to the moon, and he also had a hand in JFK's most important speeches.

1. COUNSELOR: A Life at the Edge of History

2. Counselor: A Life at the Edge of History

3. COUNSELOR: A Life at the Edge of History

4. COUNSELOR: A Life at the Edge of History Sorensen, Ted