Items related to Lord of Light 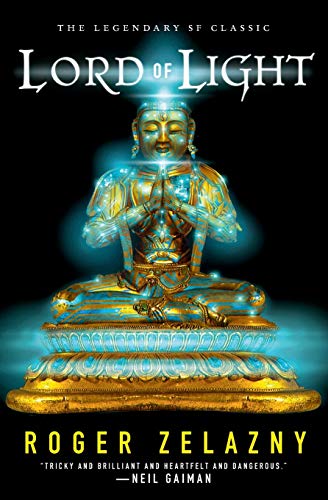 "Funny, wise, and infused with a sense of wonder and knowledge....Nobody else made myths real and valuable in the way Roger Zelazny could."
--Neil Gaiman

Lord of Light is a classic tale of the far future from the incomparable Roger Zelazny. Winner of the Hugo Award--one of six Zelazny received over the course of his legendary career, as well as three Nebula Awards and numerous other honors--Lord of Light stands with Joe Haldeman's The Forever War and Frank Herbert's Dune as one of the seminal novels that changed the way readers looked at science fiction. Experience it and you will understand why New York Times bestselling sf author Greg Bear says, "Reading Zelazny is like dropping into a Mozart string quartet as played by Thelonius Monk."

In the 1960s, Roger Zelazny dazzled the SF world with what seemed to be inexhaustible talent and inventiveness. Lord of Light, his third novel and the seventh in Millennium's SF Masterworks series, is his finest book: a science fantasy in which the intricate, colourful mechanisms of Hindu religion, of capricious gods and repeated reincarnations, are wittily underpinned by technology. "For six days he had offered many kilowatts of prayer, but the static kept him from being heard On High." The gods are a starship crew who subdued a colony world, developed godlike--though often machine-enhanced--powers during successive lifetimes of mind transfer to new, cloned bodies and now lord it over descendants of the ship's mere passengers. Their tyranny is opposed by retired god Sam, who mocks the Celestial City, introduces Buddhism to subvert Hindu dogma, allies himself with the planet's native "demons" against Heaven, fights pyrotechnic battles with bizarre troops and weapons, plays dirty with politics and poison and dies horribly but won't stay dead.... It's a huge, lumbering, magical story, told largely in flashback, full of wonderfully ornate language (and one unforgivable pun) that builds up the luminous myth of trickster Sam, Lord of Light. Essential SF reading, despite this edition's tiresome typographic errors. --David Langford

Reprint has different typesetting
Comments on Amazon have made us aware that the edition we used as the basis of our reprint of LORD OF LIGHT was riddled with typographical errors. We have recently reprinted the book, and have used as our source a different edition which we hope is a more accurate text.

Lord of Light (Paperback or Softback)