Items related to What Went Wrong?: The Clash Between Islam and Modernity...

Lewis, Bernard W. What Went Wrong?: The Clash Between Islam and Modernity in the Middle East

What Went Wrong?: The Clash Between Islam and Modernity in the Middle East 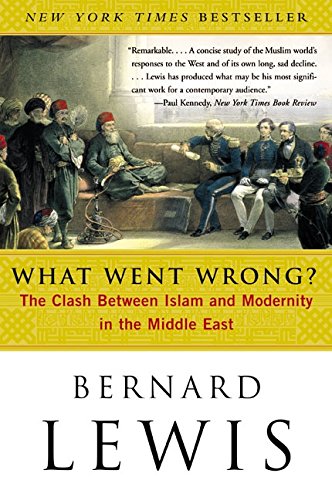 For centuries, the world of Islam was in the forefront of human achievement -- the foremost military and economic power in the world, the leader in the arts and sciences of civilization. Christian Europe was seen as an outer darkness of barbarism and unbelief from which there was nothing to learn or to fear. And then everything changed. The West won victory after victory, first on the battlefield and then in the marketplace.In this elegantly written volume, Bernard Lewis, a renowned authority an Islamic affairs, examines the anguished reaction of the Islamic world as it tried to make sense of how it had been overtaken, overshadowed, and dominated by the West. In a fascinating portrait of a culture in turmoil, Lewis shows how the Middle East turned its attention to understanding European weaponry, industry, government, education, and culture. He also describes how some Middle Easterners fastened blame on a series of scapegoats, while others asked not "Who did this to us?" but rather "Where did we go wrong?"With a new Afterword that addresses September 11 and its aftermath, What Went Wrong? is an urgent, accessible book that no one who is concerned with contemporary affairs will want to miss.

A leading authority on Near Eastern Studies explores the decline of Islamic power in the Middle East and traces the impact of these events on the modern era. Reprint.

This had a press date of 2 May. Bernard did a big interview with the SUNDAY TIMES NEWS REVIEW section which ran on 5 May and we have had some good reviewcoverage with reviews still coming in: ''WHAT WENT WRONG? is a masterly, engaging account of its (the Islamic state) steady decline and clashes with modernity.'Stephen Grey, THE SUNDAY TIMES 'Those who wish to gain a deeper understanding of the current problems in the Middle East should start by reading this book, written by a great scholar whose respect for a once-great civilisation is as clear as his cool-headed analysis of what it has become today.'Ian Buruma, THE SUNDAY TELEGRAPH 'authoritative book'Akbar Ahmed,THE GUARDIAN 'bold lines of discussion and masterly perspective'Anton La Guardian, THE DAILY TELEGRAPH 'the book is a great pleasure to read because of the breadth of Lewis's knowledge, his ability to summon up the illuminating quotation, his familiarity with unsual byways of historical investigation, and, of course, the delightful fluency of his pen.'ME Yapp, LITERARY REVIEW 'Few contemporary scholars of Islamic culture and history can match the erudition and insight of Lewis. In this work he offers a learned and absorbing explanation of the reasonsfor the rather sad state in which the Muslim world finds itself today despite all the achievements and glory that Islam enjoyed in medieval times. And a very compelling explanation it is too'.COMMONWEALTH LAWYERS ASSOCIATION 2002 The book was also selected by John Gross in the SUNDAY TELEGRAPH for his summe

1. What Went Wrong?: The Clash Between Islam and Modernity in the Middle East

2. What Went Wrong?: The Clash Between Islam and Modernity in the Middle East

3. What Went Wrong?: The Clash Between Islam and Modernity in the Middle East Lewis, Bernard

4. WHAT WENT WRONG?: THE CLASH BETW