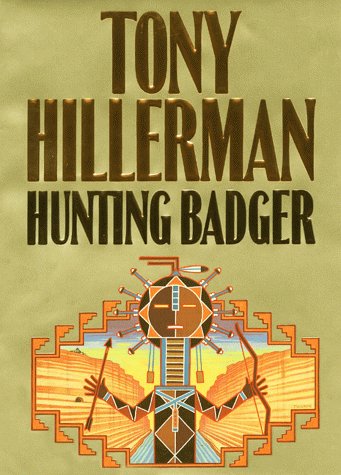 While the Federal Government combs the Navaho reservation looking for three copkillers, Leaphorn and Jim Chee each develop their own theories on the crime and the seemingly inept but technological savvy search for the killers.

The marvellous Hunting Badger is Tony Hillerman's 13th novel featuring Navajo Tribal Police officers Joe Leaphorn and Jim Chee. Here the two cops (who appeared in separate books early on but whose paths now routinely cross) are working two angles of the same case: Catching the right-wing militiamen who pulled off a violent heist at an Indian casino. Hillerman serves up plenty of action and enough plot twists to keep readers off balance, leading up to a satisfyingly tense climax in which Leaphorn and Chee stalk a killer in his hideout. But through it all, the cardinal Hillerman virtues are in evidence: Economical, pellucid prose; a panoply of Indian-country characters who seem to rise right up off the page; vivid evocations of the Southwest's bleak beauty and rich insights into Navajo life and culture. (Hillerman once told an interviewer that the highest compliment he'd ever received was hearing that many Navajo readers assumed that he himself was Navajo--he's not.)

While first-time readers will find plenty to enjoy in Hunting Badger, it holds special pleasures for long-time fans. There's more and deeper contact between Leaphorn and Chee and we continued to see deeper into the prickly Leaphorn's human side (though presented without fuss or sentimentality). Chee finally begins to get over Janet Pete (it took about six books) and inch toward a new love interest. And in a moving section involving Chee's spiritual teacher Frank Sam Nakai, the shaman provides a key insight into the case.

In a world teeming with "sense of place" mysteries--set in Seattle, Alaska, the Arizona desert or Chicago--it can be a shock to return to Hillerman, who started it all, and realise just how superior he is to the rest of the pack. --Nicholas H. Allison

‘On their own [Leaphorn and Chee] are compelling: as a duo, they’re the best since Lennon and McCartney.’ Washington Post

‘An impressive piece of writing from one of american’s best crime writers.’ Crime Time

Book Description HarperCollins, 1999. Hardcover. Condition: New. Dust Jacket Condition: As New. 1st Edition. NEW! Jacket has some shelf wear, but that's it. Never read, no marks, no stickers, nothing but ORIGINAL Tony Hillerman. See what won the guy the Friend of the Navajo award and so many other honors!. Seller Inventory # 001209