Items related to Into the Garden: A Wedding Anthology

Into the Garden: A Wedding Anthology

Into the Garden: A Wedding Anthology 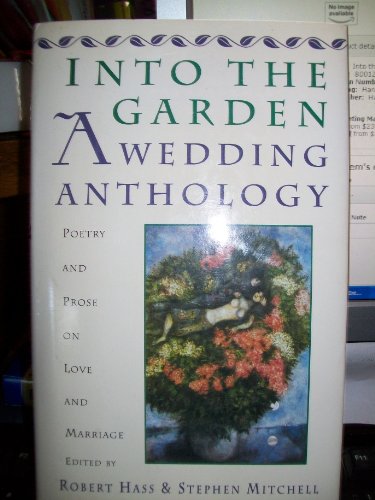 Robert Hass s books of poetry include Sun Under Wood: New Poems, Human Wishes, Praise, and Field Guide, which was selected by Stanley Kunitz for the Yale Younger Poets Series. Hass also co-translated several volumes of poetry with Czeslaw Milosz, most recently Facing the River, and is author or editor of several other collections of essays and translation, including The Essential Haiku: Versions of Basho, Buson, and Issa, and Twentieth Century Pleasures: Prose on Poetry. Hass served as Poet Laureate of the United States from 1995 to 1997 and is currently a Chancellor of The Academy of American Poets. His collection Time and Materials won both the Pulitzer Prize and the National Book Award. He lives in California with his wife, poet Brenda Hillman, and teaches at the University of California, Berkeley. Stephen Mitchell was born in Brooklyn in 1943, educated at Amherst, the Sorbonne, and Yale, and de-educated through intensive Zen practice. His many books include the bestselling Tao Te Ching, Gilgamesh, and The Second Book of the Tao, as well as The Gospel According to Jesus, Bhagavad Gita, The Book of Job, and Meetings with the Archangel. He is married to Byron Katie and co-wrote two of her bestselling books: Loving What Is and A Thousand Names for Joy.When he is not writing, he likes to in no particular order think about writing, think about not writing, not think about writing, and not think about not writing. His favorite color is blue, which happens to be the color of his wife s eyes.

An anthology of poetry and prose suitable for reading at wedding ceremonies features unconventional readings from Chinese, African, native American, Buddhist, Christian, and other cultures.

Into the Garden: A Wedding Anthology : Poetry and Prose on Love and Marriage

Into the Garden: A Wedding Anthology : Poetry and Prose on Love and Marriage

Into the Garden: A Wedding Anthology : Poetry and Prose on Love and Marriage Hass, Robert and Mitchell, Stephen