Items related to Religion and society in a Cotswold vale: Nailsworth,...

Religion and society in a Cotswold vale: Nailsworth, Gloucestershire, 1780-1865 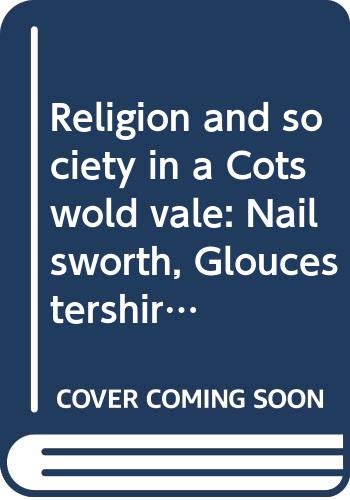 During the English Industrial Revolution, the Vale of Nailsworth was a rural-industrial settlement and a center of evangelical Nonconformity. Why did the transition to the factory system bring deindustrialization and social decline rather than long-term advancement? Albion Urdank investigates the modernization of Nailsworth from many perspectives, revealing the experience and the mentalite of ordinary people in their ecological, economic, and social environments. His innovative approach, in the tradition of the Leicester and Annales schools, contributes to the historical literature on popular religion, secularization, local history, and European industrialization, and will appeal to a wide spectrum of interdisciplinary interests.

Albion M. Urdank is Assistant Professor of History at the University of California, Los Angeles.

"Urdank has mastered an immense amount of material. . . . It is a valuable case study that will broaden and sharpen our understanding of religion in the early nineteenth century, as well as introduce much-needed new information."Edward M. Cook, Jr., University of Chicago

"A splendid job of reconstructing all the important social dimensions of this community. . . . This is a well-documented, readable, and thorough account of the ways in which religious conviction and its social environment interacted in an English village during the course of industrialization. . . . It provides a standard of methodological detail and sophistication as well as substantive conclusions against which to compare the results of other local studies and theories of a more general sort."Robert Wuthnow, author of Meaning & Moral Order

1. Religion and Society in a Cotswold Vale: Nailsworth, Gloucestershire, 1780-1865

Book Description University of California, 1990. Hardcover, no dust jacket. Ex-library. Aside from library matter, this is a pristine copy that appears unread. 448 pages. This item is at our location in Eugene, Oregon. 448 pp. Seller Inventory # 614071

Book Description University of California Press, 1990. Condition: Good. Former Library book. Shows some signs of wear, and may have some markings on the inside. Seller Inventory # 15540473-20

3. Religion and Society in a Cotswold Vale: Nailsworth, Gloucestershire, 1780-1865