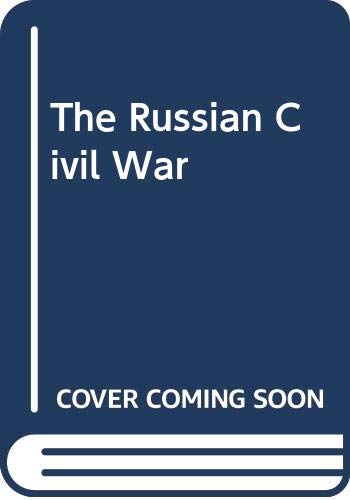 This is not simply the story of that collapse and the vast panorama of rebellion and marching armies which accompanied it, but of the painful and costly reconstruction of Russian power under a Soviet regime within shrunken borders. For Russia the catastrophe was terrible. The Civil War cost her between seven and ten million dead - four times her casualties in the First World War. She had lost Poland, Finland, the Baltic States and for a time seemed as if she would lose the Transcaucasia as well. She knew she was opposed by Britain, America and Japan. The result was a suspicious, aggrieved and paranoid power desperate for revenge and the return of the lost lands. Meticulously argued and powerfully written, this is not simply the story of a long-forgotten war, but the terrible warning of what happens when a great country implodes and collapses. The Russian Civil War shaped the mentality of the Soviet regime more than any other event in its history. The infant Soviet regime faced large 'White' armies of anti-Communist Russians, Anarchist mutineers, break-away nationalist minorities and invading armies from most of the major powers of the First World War. The murderous civil war with huge casualties left the Soviets with a lasting mistrust of the outside world that remained in force until the end of the regime 65 years later. The Russian Civil War has an extensive bibliography has been updated to include numerous works written since the collapse of Communism.

The Russian Civil War is an event which generally gets lumped together with the the Great War. In fact, seven million people died because of it. That rather puts the American Civil War in the shade, though there are endless television dramas made on that conflict. Mawdsley takes us deftly through the myriad political allegiances and betrayals which led to such loss of life. Overwhelmingly we see the cancer of zealotry and dogmatism sweeping aside all humanity - a precursor of the horror to come under Stalin.

Just how inevitable was the Red victory in the ferocious civil conflict that followed the Bolshevik Revolution of 1917? Mawdsley, an admirably levelheaded British historian, shows that despite the fractured nature and inherent weakness of the White forces, the odds were heavily stacked against the Reds. They faced foreign military intervention and a vast battleground that favored their foes.... Mawdsley skillfully boils down complex situations without oversimplifying them, and his vivid, readable account of this savage war is now the most authoritative in English.

Hands up: Who knew that American forces once invaded Russia? The Russian Civil War, writes Mawdsley (Modern History/Glasgow Univ.; Thunder in the East: The Nazi-Soviet War, 1941 - 1945, 2006, etc.), began just as soon as moved swiftly to consolidate power, repressing the socialists who dominated the nation as a whole but who were weak in the industrial cities. At the same time, Cossacks, monarchists, cadets and other foes of the new regime took up arms, while "the civilian opponents of the Bolsheviks, people of the moderate Left and Right, lacked effective combat forces of their own and played no parts." The contending extremist armies, Red and White, would be locked in war for the next three years, with units from the British, American and French armies appearing on various fronts to battle the Bolshevik forces. The state established a program of what the regime called "War Communism," taking emergency measures that in some cases turned out to be permanent. Radical policies of appropriation and state monopoly, backed by a powerful army, "helped the Bolsheviks to take power," writes Mawdsley, even if "as the months passed . . . the political benefits came to look more dubious" as productivity plummeted and food shortages gripped the nation - driving many farmers, in the bargain, into the anticommunist camp. The Whites soon began to lose the fight, however, routed at places such as Tsaritsyn, a city on the Volga that would be renamed Stalingrad. Mawdsley attributes the loss to many factors, from being outnumbered and outgunned to the staggering incompetence of many White generals and the lack of central coordination among the anti-Bolshevik forces. Sporadic fighting continued until 1922in Siberia, carried out by figures such as the Baron Ungern-Sternberg, "an unbalanced Baltic nobleman . . . already notorious for his atrocities in Transbaikal." After that time, though, Soviet domination was complete and would endure for another seven decades. A well-rendered account of a history too little known in the West.

Evan Mawdsley is a professor of Modern History at the University of Glasgow, where he specialises in war in the modern ages, in particular Soviet studies. Other books written by him include Stalin Years: The Soviet Union 1929 - 1953 (Manchester University Press, 1998) and Moscow & Leningrad (Benn, 1980).