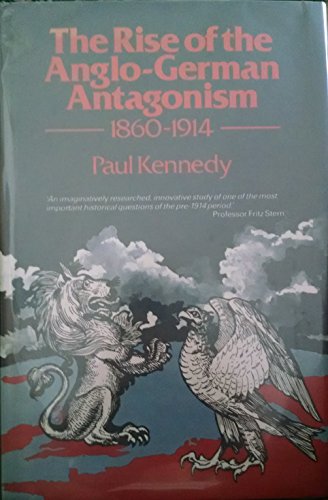 Since its first publication in 1980, Professor Kennedy's masterly account of the rivalry between Great Britain and Germany in the period leading to the First World War has established itself as the definitive work on the subject.

Over ten years of research in more than sixty archives in Britain and Germany culminated in this full-scale, meticulous analysis. The result reaches far beyond a diplomatic narrative of relations between the two countries. It concerns itself with a thorough comparison of the two societies, their political cultures, economies, party politics, courts, the role of the press and pressure groups, and other factors. The work therefore contributes to the larger debate on the nature of foreign policy, as well as to the specific controversies over the British-German antagonisms that eventually led to war.

Paul M. Kennedy is J. Richardson Dilworth Professor of History at Yale University. He regularly publishes in The Los Angeles Times, The New York Times Book Review, The Atlantic, and many other periodicals and scholarly journals. The author of thirteen books, he is perhaps best known for The Rise and Fall of the Great Powers. His most recent publication (2006) is The Parliament of Man: The Past, Present, and Future of the United Nations.

Book Description Hardback. Condition: Very Good. The book has been read, but is in excellent condition. Pages are intact and not marred by notes or highlighting. The spine remains undamaged. Seller Inventory # GOR009011283

Book Description Unwin Hyman Limited, London, 1980. Hard Cover. Condition: Good. First Edition. Very light rubbing and edgewear, with a small tear and some bleaching on the spine of the jacket. Ownership marking on FEP. The text is otherwise clean and secure in binding, but has started to yellow with age. Size: 8vo - over 7ľ" - 9ľ" tall. Seller Inventory # 114872

Book Description Unwin Hyman, 1981. Hardcover. Condition: GOOD. Has little wear to the cover and pages. Contains some markings such as highlighting and writing. Seller Inventory # 0049400606_abe_gd

Book Description Unwin Hyman, 1981. Condition: Good. A+ Customer service! Satisfaction Guaranteed! Book is in Used-Good condition. Pages and cover are clean and intact. Used items may not include supplementary materials such as CDs or access codes. May show signs of minor shelf wear and contain limited notes and highlighting. Seller Inventory # 0049400606-2-4