Items related to The Creativity Code 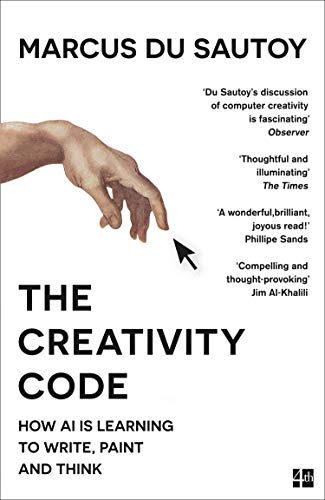 Marcus du Sautoy has been named by the Independent on Sunday as one of the UK's leading scientists, has written extensively for the Guardian, The Times and the Daily Telegraph and has appeared on Radio 4 on numerous occasions. In 2008 he was appointed to Oxford University’s prestigious professorship as the Simonyi Chair for the Public Understanding of Science, a post previously held by Richard Dawkins.

1. The Creativity Code: How Ai is Learning to Write, Paint and Think (Paperback)

Book Description HarperCollins Publishers, United Kingdom, 2020. Paperback. Condition: New. Language: English. Brand new Book. 'Du Sautoy's discussion of computer creativity is fascinating' Observer CAN MACHINES BE CREATIVE? In The Creativity Code, Marcus du Sautoy examines the nature of creativity, asking how much of our emotional response to art is a product of our brains reacting to pattern and structure, and exactly what it is to be creative in mathematics, art, language and music. Exploring how long it might be before machines compose a symphony or paint a masterpiece, and whether they might jolt us into being more imaginative in turn, The Creativity Code is a fascinating and very different exploration into the essence of what it means to be human. Seller Inventory # AA89780008288198

7. The Creativity Code: How AI is learning to write, paint and think

Book Description William The 4Th Harpercollins UK Mrz 2020, 2020. Taschenbuch. Condition: Neu. Neuware - Mathematician and author of 'The Order Of Time' Marcus du Sautoy explores how recent developments in AI and machine learning could mean that it's not just humans who can create art. He also examines what these new developments mean for the arts and for maths. Englisch. Seller Inventory # 9780008288198