Items related to The Tiger Who Came to Tea Pop-Up Book, Tiger Pop Up

Kerr, Judith The Tiger Who Came to Tea Pop-Up Book, Tiger Pop Up

The Tiger Who Came to Tea Pop-Up Book, Tiger Pop Up 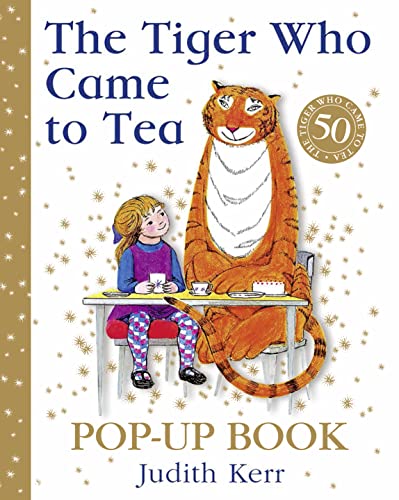 An exciting luxury pop-up book in celebration of the fiftieth anniversary of Judith Kerr’s classic children’s book, The Tiger Who Came to Tea. The perfect gift for children aged 3 and up.

First published in 1968 and never out of print, The Tiger Who Came to Tea has become a timeless classic enjoyed and beloved by generations of children. Now in a spectacular pop-up edition with seven incredible spreads, it’s the perfect gift for fans of all ages.

The Tiger has been coming to Tea for 50 glorious years! First published in 1968 and never out of print, The Tiger Who Came to Tea by Judith Kerr (creator of Mog the Forgetful Cat), has become a timeless classic enjoyed and beloved by generations of children. For the first time ever, Judith Kerr’s vibrant illustrations are brought to life in an exciting pop-up book children of all ages will love to read again and again.

The magic begins at teatime!

‘However many times we read this book, it never fails to delight. This wonderful hardback pop-up edition brings the story to life yet again. Something to treasure for always.’ Angels and Urchins Magazine

‘It’s no surprise Judith’s work is still popular. It owes nothing to the vagaries of style or fashion. Her warmth and humanity are timeless.’ Michael Foreman

‘A modern classic.’ The Independent.

‘This book has enduring charm and young children will delight in the preposterous notion of a tiger creating mayhem in the house.’ Junior Magazine

Praise for Mog the Forgetful Cat:

‘Grandparents are likely to get as much fun out of seeing it again as the new generation of fans just learning to read!’ Choice Magazine

‘Kerr’s warmth, humour and honesty make this an engaging introduction to a difficult topic.’ Financial Times

‘A supremely sensitive story.’ The Times

Praise for One Night in the Zoo:

Judith Kerr OBE was born in Berlin. Her family left Germany in 1933 to escape the rising Nazi party, and came to England. She studied at the Central School of Art and later worked as a scriptwriter for the BBC.

Judith married the celebrated screenwriter Nigel Kneale in 1954. She left the BBC to look after their two children, who inspired her first picture book, The Tiger Who Came to Tea. Published in 1968 and never out of print in the fifty years since, it has become a much-loved classic and perennial bestseller.

Judith was awarded the Booktrust Lifetime Achievement Award in 2016, and in 2019 was named Illustrator of the Year at the British Book Awards. Judith died in May 2019 at the age of 95, and her stories continue to entertain and delight generations of children.

1. The Tiger Who Came to Tea

2. The Tiger Who Came to Tea

Book Description Condition: Good. A+ Customer service! Satisfaction Guaranteed! Book is in Used-Good condition. Pages and cover are clean and intact. Used items may not include supplementary materials such as CDs or access codes. May show signs of minor shelf wear and contain limited notes and highlighting. Seller Inventory # 0008280606-2-4

3. The Tiger Who Came to Tea

Book Description Condition: Fair. Independent family-run bookstore for over 50 years! Buy with confidence! Book is in acceptable condition with wear to the pages, binding, and some marks within. Seller Inventory # bk0008280606xvz189zvxacp