Items related to There’s a Snake in My School!

Walliams, David There’s a Snake in My School!

There’s a Snake in My School! 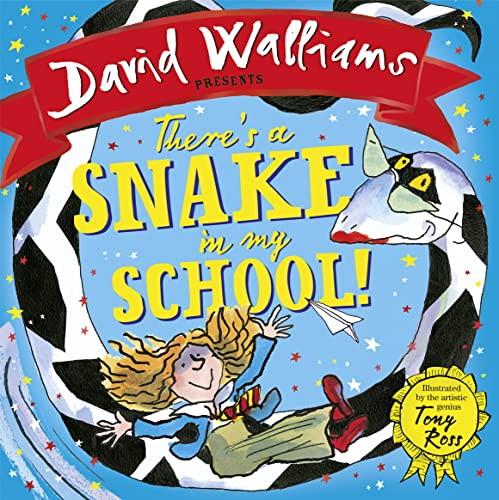 From Number One bestselling picture book duo, David Walliams and Tony Ross, comes this ssssspectacularly funny picture book for children of 3 and up.

Miranda loves to be different, and on Bring-your-pet-to-school Day she introduces everyone to her very DIFFERENT pet...

Miss Bloat the headmistress doesn’t think snakes should be allowed in school. But Penelope has other ideas...

“Funny and with brilliant illustrations... sure to be another bestseller” – The Sun

"Another triumph for David Walliams. His books are a breath of wonderful fresh air" – The Sun

Since 2008 David Walliams has taken the children’s literary world by storm. His bestselling titles have been translated into over forty languages and have sold over eleven million copies in the UK alone. Walliams’ books have achieved unprecedented critical acclaim and countless broadsheet reviewers have compared him to his all-time hero, Roald Dahl. Born in London, Tony Ross went to art school in Liverpool. His cartoons have appeared in famous publications the world over. His first book, Hugo and the Wicked Winter, was published in 1972. Tony has since written over 100 books and illustrated over 2000! His creations Towser and The Little Princess have been turned into TV series. David and Tony’s first three picture books together, The Slightly Annoying Elephant, The First Hippo on the Moon and The Bear Who Went Boo!, were all Number One bestsellers. David and Tony have also worked together on six of David’s phenomenally successful children’s novesl – Billionaire Boy, Gangsta Granny, Ratburger, Demon Dentist, Awful Auntie and Grandpa’s Great Escape, as well as on bestselling short-story collection The World’s Worst Children.

Book Description HarperCollins Publishers, United Kingdom, 2016. Hardback. Condition: New. Tony Ross (illustrator). Amazon Kindle edition. Language: English. Brand new Book. Miranda loves to be different, so on Bring-your-pet-to-school Day she introduces everyone to her very different pet. Penelope the snake, leading to uproarious consequences.There s a Snake in my School! is a laugh- out-loud story of mischief and mayhem of the kind David s young fans have grown to love. With his trademark hilarity and warmth combined with Tony s genius illustrations, there s no doubt this new addition to the Walliams canon will delight and enchant his ever-increasing horde of picture book fans. Seller Inventory # AA89780008172701

2. Thereandapos;s a Snake in My School!

4. There's a Snake in My School! (Hardcover)

Book Description 2016. Hardcover. Condition: New. Hardcover. From Number One bestselling picture book duo, David Walliams and Tony Ross, comes this ssssspectacularly funny picture book for children of 3 and up. Miranda loves to be different, and on .Shipping may be from multiple locations in the US or from the UK, depending on stock availability. 32 pages. 0.270. Seller Inventory # 9780008172701

10. Thereandapos;s a Snake in My School!