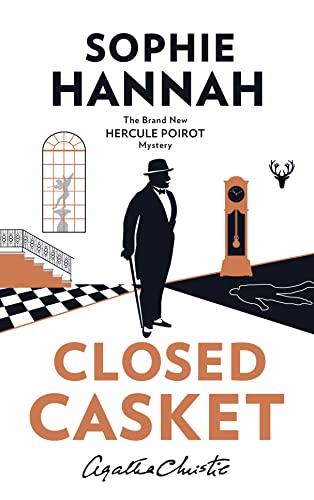 Hercule Poirot returns in another brilliant murder mystery that can only be solved by the eponymous Belgian detective and his ‘little grey cells’.

Lady Athelinda Playford has planned a house party at her mansion in Clonakilty, County Cork, but it is no ordinary gathering. As guests arrive, Lady Playford summons her lawyer to make an urgent change to her will – one she intends to announce at dinner that night. She has decided to cut off her two children without a penny and leave her fortune to someone who has only weeks to live . . .

Among Lady Playford’s guests are two men she has never met – the famous Belgian detective, Hercule Poirot, and Inspector Edward Catchpool of Scotland Yard. Neither knows why he has been invited . . . until Poirot starts to wonder if Lady Playford expects a murderer to strike. But why does she seem so determined to provoke, in the presence of a possible killer?

When the crime is committed in spite of Poirot’s best efforts to stop it, and the victim is not who he expected it to be, will he be able to find the culprit and solve the mystery?

Following the phenomenal global success of The Monogram Murders, which was published to critical acclaim following a co-ordinated international launch in September 2014, international best-selling crime writer Sophie Hannah has been commissioned by Agatha Christie Limited to pen a second fully-authorised Poirot novel. The new book marks the centenary of the creation of Christie’s world-famous detective Hercule Poirot, introduced in her first book The Mysterious Affair at Styles.

‘Sparkling second outing for Hannah's reimagined Poirot. The setting (posh Irish country house), the characters (country lawyers, creepy male secretary, stroppy flapper, etc) and the period vocabulary are all spot on, but it's the utter fiendish unpredictability of the plot that makes Sophie the new Agatha’ Sunday Times

‘A brand new (and fiendishly puzzling) case for Hercule Poirot – seriously, what could be more blissful?’ Saga Magazine

‘Christie’s boots as a crime writer are hard to fill, but Hannah achieves it quietly and intelligently with Poirot-sized steps once again in Closed Casket... The whole book will not only delight Agatha Christie devotees but anyone who loves a good, well written murder mystery’ Devon Life

‘A brand new (and fiendishly puzzling) case for Hercule Poirot – seriously, what could be more blissful? ... Gorgeous’ SAGA

'a literary marriage made in heaven!’ THE TIMES

‘a novel fizzing with ideas and spikey dialogue’ SUNDAY EXPRESS

Sophie Hannah is an internationally bestselling crime fiction writer. Her crime novels have been translated into 34 languages and published in 51 countries. Her psychological thriller The Carrier won the Specsavers National Book Award for Crime Thriller of the Year in 2013. In 2014 and 2016, Sophie published The Monogram Murders and Closed Casket, the first new Hercule Poirot mysteries since Agatha Christie's death, both of which were national and international bestsellers. Sophie’s novels The Point of Rescue and The Other Half Lives have been adapted for television as Case Sensitive, starring Olivia Williams and Darren Boyd. Sophie is also a bestselling poet who has been shortlisted for the TS Eliot award. Her poetry is studied at GCSE and A-level throughout the UK. Sophie is an Honorary Fellow of Lucy Cavendish College, Cambridge. She lives in Cambridge with her husband, two children and dog.

Agatha Christie is known throughout the world as the Queen of Crime. Her books have sold over a billion copies in English with another billion in foreign languages. She is the most widely published author of all time, outsold only by the Bible and Shakespeare.

Book Description Paperback. Condition: Very Good. The book has been read, but is in excellent condition. Pages are intact and not marred by notes or highlighting. The spine remains undamaged. Seller Inventory # GOR007506072

Book Description Paperback. Condition: Good. The book has been read but remains in clean condition. All pages are intact and the cover is intact. Some minor wear to the spine. Seller Inventory # GOR007796360

Book Description HarperCollins, 2016. Hardcover. Condition: Good. Signed. SIGNED BY AUTHOR (unverified). Good condition is defined as: a copy that has been read but remains in clean condition. All of the pages are intact and the cover is intact and the spine may show signs of wear. The book may have minor markings which are not specifically mentioned. Most items will be dispatched the same or the next working day. Seller Inventory # mon0014103374

Book Description HARPER COLLINS, 2016. Hardcover. Condition: Good. Connecting readers with great books since 1972. Used books may not include companion materials, some shelf wear, may contain highlighting/notes, may not include cdrom or access codes. Customer service is our top priority!. Seller Inventory # S_268551034

Book Description HARPER COLLINS, 2016. Hardcover. Condition: Good. Connecting readers with great books since 1972. Used books may not include companion materials, some shelf wear, may contain highlighting/notes, may not include cdrom or access codes. Customer service is our top priority!. Seller Inventory # S_260375588

Book Description HARPER COLLINS, 2016. Hardcover. Condition: Good. Signed. Connecting readers with great books since 1972. Used books may not include companion materials, some shelf wear, may contain highlighting/notes, may not include cdrom or access codes. Customer service is our top priority!. Seller Inventory # S_281074424

Book Description HARPER COLLINS, 2016. Condition: Good. Ships from the UK. Former Library book. Shows some signs of wear, and may have some markings on the inside. Seller Inventory # GRP95650563