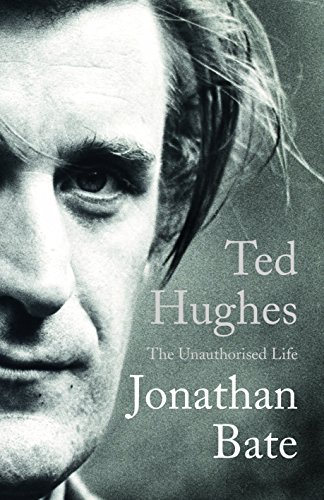 SHORTLISTED FOR THE 2015 SAMUEL JOHNSON PRIZE

Gripping and at times ineffably sad, this book would be poetic even without the poetry. It will be the standard biography of Hughes for a long time to come Sunday Times

Captures the great poet in all his wild complexity. Powerful and clarifying, richly layered and compelling Melvyn Bragg, Observer

Ted Hughes, Poet Laureate, was one of the greatest writers of the twentieth century. He is one of Britain s most important poets, a poet of claws and cages: Jaguar, Hawk and Crow. Event and animal are turned to myth in his work. Yet he is also a poet of deep tenderness, of restorative memory steeped in the English literary tradition. A poet of motion and force, of rivers, light and redemption, of beasts in brooding landscapes.

With an equal gift for poetry and prose, and with a soul as capacious as any poet who has lived, he was also a prolific children s writer and has been hailed as the greatest English letter-writer since John Keats. With his magnetic personality and an insatiable appetite for friendship, for love and for life, he also attracted more scandal than any poet since Lord Byron. At the centre of this book is Hughes s lifelong quest to come to terms with the suicide of his first wife, Sylvia Plath, the saddest and most infamous moment in the public history of modern poetry.

Ted Hughes left behind him a more complete archive of notes and journals than any other major poet, including thousands of pages of drafts, unpublished poems and memorandum books that make up an almost complete record of Hughes s inner life, preserved by him for posterity.

Renowned scholar Sir Jonathan Bate has spent five years in his archives, unearthing a wealth of new material. Shortlisted for the Samuel Johnson Prize, his book offers for the first time the full story of Ted Hughes's life as it was lived, remembered and reshaped in his art. It is a book that honours, though not uncritically, Ted Hughes s poetry and the art of life-writing, approached by his biographer with an honesty answerable to Hughes s own.

Remarkable ... one of the very best biographies in years Joyce Carol Oates

I found it as spirited and sympathetic as it is scorching Bel Mooney, Books of the Year, Daily Mail

A work of head-spinning revelations ... Bate offers a complete picture of Hughes: the man, the work and the restless mythologies that prowled his imagination ... A moving, fascinating biography The Times

Comprehensive and definitive ... Bate's relaxed prose keeps everything moving anecdotally ... underpinning it all is a vast command of archival material ... He is also a sure guide to the genesis and reception of each of Hughes's major books Daily Telegraph

Bate captures the great poet in all his wild complexity ... A powerful and clarifying study, richly layered and compelling Melyn Bragg, Observer

[An] important ... ultimately triumphant biography ... Bate is obviously suited as a biographer and critic. His standing in his academic profession is eminent Financial Times

Magisterial ... Bate writes with sympathy and perception about Hughes and his poetry. This fine book tells readers as much as they need to know for now Economist

Bate has read this huge mass of material with a scholar s ability to date and arrange it ... This scrupulous and lucid biography makes it all seem like muddle and self-deception, tormenting to himself and the many who loved him Guardian

Elegantly retells the myth and, occasionally, violence of the story and gives it new flesh , Philip Hoare, Spectator, Books of the Year

The most controversial biography of the year , Gaby Wood, Daily Telegraph, Books of the Year

Epic in both scale and voice Independent, Books of the Year

A great present idea for the literary fan in your life. Bate s fascinating biography is a painstaking exploration of Hughes Mail on Sunday

--Mail on Sunday About the Author:

Sir Jonathan Bate is Provost of Worcester College and Professor of English Literature at Oxford University. He is Vice-President of the British Academy, a Governor of the Royal Shakespeare Company, Honorary Fellow of St Catharine s College, Cambridge, and was a 2014 judge for the Man Booker Prize. His biography of John Clare (a poet who was a key influence on Ted Hughes) was short-listed for seven literary prizes and won three of them, including Britain s two oldest literary awards, the James Tait Black Prize for Biography and the Hawthornden Prize (which Hughes won for Lupercal). Soul of the Age, his intellectual biography of Shakespeare, was runner up for the Biography Prize of American PEN. He has also published on the influence of the classics ( Shakespeare and Ovid ), on Wordsworth ( Romantic Ecology ) and the poetry of nature ( The Song of the Earth ), and has worked in the theatre ( Being Shakespeare: A One-Man Play for Simon Callow), all of which were Hughesian obsessions.

Book Description Hardcover. Condition: New. Dust Jacket Condition: New. 1st Edition. SIGNED on the title page by the author. This moving biography brilliantly evokes the life and times of a great and sometimes tortured writer. NEW and UNREAD hardback first edition, in a protected perfect jacket. No marks other than the signature. No former owner marks, not ex library. Many of the first edition copies went to libraries. Language: eng. Signed by Author(s). Seller Inventory # ABE-1515494250558