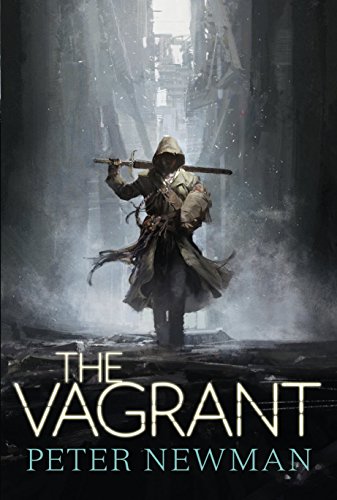 The Vagrant is his name. He has no other.

Years have passed since humanity’s destruction emerged from the Breach.

Friendless and alone he walks across a desolate, war-torn landscape.

As each day passes the world tumbles further into depravity, bent and twisted by the new order, corrupted by the Usurper, the enemy, and his infernal horde.

His purpose is to reach the Shining City, last bastion of the human race, and deliver the only weapon that may make a difference in the ongoing war.

What little hope remains is dying. Abandoned by its leader, The Seven, and its heroes, The Seraph Knights, the last defences of a once great civilisation are crumbling into dust.

But the Shining City is far away and the world is a very dangerous place.

★★★★★ 'For fans of classic science-fiction literature, this is a must-read.' – SciFi Now

‘The Vagrant is a joy to read: an original and engrossing world, a strong story and a protagonist who is intensely charismatic despite – or because of – his silence. Newman’s debut is written with confidence, flair and imagination, bringing his dark world to marvellously macabre life’
Adrian Tchaikovsky, Author of Shadows of the Apt series

‘A stunning and ambitious debut novel set in a unique and imaginative world where the only hope rests on the capacity of human beings to love’ Melinda M. Snodgrass

PETER NEWMAN is the author of the critically acclaimed, award-winning Vagrant Trilogy: The Vagrant, The Malice, The Seven. He sometimes pretends to be a butler for the Tea and Jeopardy podcast, which he co-writes and for which he won a Hugo Award in 2017. His first book, The Vagrant, won the David Gemmell Morningstar Award in 2016 for best Fantasy Debut of the Year. Peter writes for George R.R. Martin’s Wild Cards series and will first appear in Knaves Over Queens. He has also written for the computer game Albion Online. He lives in Somerset.

Book Description Harper Voyager, 2015. Hardcover. Condition: Very Good. Very Good: a copy that has been read, but is in excellent condition. Pages are intact and not marred by notes or highlighting. The spine remains undamaged. Most items will be dispatched the same or the next working day. Seller Inventory # wbb0015707399

Book Description Harper Voyager, 2015. Hardcover. Condition: Good. Ex library copy with usual stamps/stickers Good condition is defined as: a copy that has been read but remains in clean condition. All of the pages are intact and the cover is intact and the spine may show signs of wear. The book may have minor markings which are not specifically mentioned. Most items will be dispatched the same or the next working day. Seller Inventory # wbb0015808654

Book Description Harper Voyager / HarperCollins, London, 2015. Hardcover. Condition: As New. Dust Jacket Condition: As New. 1st Edition. Signed, First Lined ("Starlight gives way to bolder neon") & Pe-Publication Dated (10.4.15) by the Author to the title Page. The Book & Dust Jacket are in As New condition. This unread book is guaranteed to be a 1st Edition, 1st Printing. Publishers number 1 confirms that this is a first printing. The Jacket, which has not been price clipped, is protected by archival protective covering. The book is professionally wrapped and packed with great care with bubble wrap and placed in a special book box to ensure that the book arrives at your destination in perfect condition. Signed by Author(s). Seller Inventory # 007373