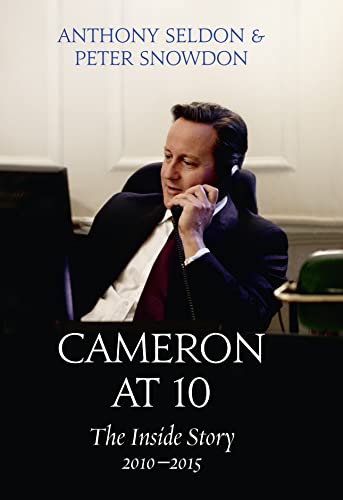 Five years in the making, ‘Cameron at 10’ is the gripping inside story of the Cameron premiership, based on over 300 in-depth interviews with senior figures in 10 Downing Street, including the Prime Minister himself.

As dusk descended on 11 May 2010, David Cameron entered 10 Downing Street as the youngest prime minister since Lord Liverpool in 1812. He stood at the head of the first Coalition government in 65 years, with the country in dire economic straits following a deep financial crisis.

From the early heady days of the Rose Garden partnership with the Liberal Democrats to the most bitterly contested general election in years, ‘Cameron at 10’ highlights forty dramatic moments in an exceptionally turbulent period in British politics. The book contains all the highs and lows on the domestic front as well as providing revealing insights into the Prime Minister’s relationships with foreign leaders, particularly the German Chancellor Angela Merkel and US President Barack Obama.

With unprecedented access to the ‘inner circle’ of politicians and civil servants that surround the Prime Minister, from Chancellor George Osborne and former Deputy Prime Minister Nick Clegg to all of Cameron’s personal team, this is the most intimate account of a serving prime minister that has ever been published.

‘Explosive... authoritative yet uncompromisingly tough... a gripping and at times astonishing account of the people who rule us’ Mail on Sunday

‘These pages are a masterclass in so-called “tick-tock” narrative – a minute-by-minute account, studded with detailed recollections and observations... A formidable achievement...Magisterial... If I were Mr Corbyn, I’d get busy reading’ Matthew D’Ancona, Evening Standard

‘As comprehensive an account of the coalition years as anyone could write so soon after the events’ Independent, Books of the Year

‘While Lord Ashcroft may have started a brief craze for pig jokes...The more interesting (and damaging) disclosures come in Cameron at 10’ Fraser Nelson, Telegraph

‘Rigorously researched, giving an insight into the inner workings of Cameron’s No 10 and the coalition that we have not seen before... While Ashcroft and Oakeshott’s Call me Dave should by no means be dismissed, ultimately the offering from Seldon and Snowdon feels a far more substantial look at an intriguing political leader’ Independent on Sunday

‘An immensely thorough work... it contains a more damaging passage than any in their rival's unauthorised work' Dominic Lawson, Sunday Times

‘A substantial piece of work – a blow-by-blow account, impeccably researched and carefully documented, of the highs and lows of the first Cameron administration. The authors appear to have enjoyed almost total access. Their judgements are on the whole balanced and the narrative compelling’ Chris Mullin, Observer

‘Where Seldon excels is in his understanding of political relationships. Seldon and Snowdon are adept at convincing friends and colleagues to talk candidly’ The Times

Anthony Seldon is the author of multiple volumes on the premiership from Edward Heath to Gordon Brown, and is considered one of Britain’s pre-eminent political biographers and contemporary historians. He is the former head of one of the country’s leading independent schools, Wellington College, and has recently been appointed Vice-Chancellor of Buckingham University.

Peter Snowdon is a journalist and historian, and duty edits BBC Radio 4’s flagship ‘Today’ Programme. He has written the unrivalled account of the Conservative Party’s return to power under David Cameron, ‘Back from the Brink’, described by Daniel Finkelstein as ‘a superb new history of the last decade in Tory politics’.

The authors have collaborated on several books together, including the twin volume biography of Tony Blair – ‘Blair’ and ‘Blair Unbound’.

Book Description William Collins, 2015. Hardcover. Condition: Good. Ex library copy with usual stamps/stickers Good condition is defined as: a copy that has been read but remains in clean condition. All of the pages are intact and the cover is intact and the spine may show signs of wear. The book may have minor markings which are not specifically mentioned. Most items will be dispatched the same or the next working day. Seller Inventory # wbb0013629875

Book Description William Collins, 2015. Hardcover. Condition: Used; Good. Wear and Tear to cover **SHIPPED FROM UK** We believe you will be completely satisfied with our quick and reliable service. All orders are dispatched as swiftly as possible! Buy with confidence!. Seller Inventory # 3781695