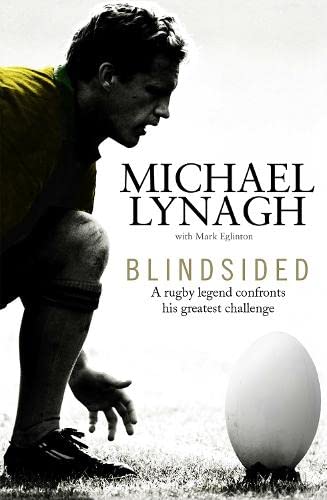 ‘Michael Lynagh’s excellent book Blindsided, one of the most thought-provoking reads of the year.’ - Robert Kitson, The Guardian.

Michael Lynagh, born in Brisbane, represented Australia in rugby union from 1984 to 1995, during which time he was capped 72 times, won the World Cup in 1991, and became the world record points scorer on his retirement. He was inducted into the International Rugby Hall of Fame in 2011, and became a TV analyst for Sky Sports and ITV. Currently he works in commercial property investment in London. He lives in Richmond with his wife and three sons.

Book Description HarperCollins Publishers, United Kingdom, 2015. Hardback. Condition: New. Language: English. Brand new Book. Former Australian rugby union legend and World Cup winner, now acclaimed television sports pundit, on his glittering career in the game - and how close he came to losing his life. Few players in the history of the game have had as illustrious a career as Wallaby fly-half and captain Michael Lynagh. In an era when Australia took the rugby world by storm with their glittering array of mercurial talent, in chief orchestrator and courageous captain Lynagh they had a pivotal figure at fly-half who shaped their style of play and at the same time played a major ambassadorial role in the world game. Yet fast forward to that April day in 2012, as Lynagh lay partially blinded in intensive care at the Royal Brisbane Hospital, his life hanging by a thread following a major stroke, his wife and three young boys on the other side of the world. The day that defined the rest of his life. In the waiting room before seeing his stricken son, Lynagh's father, trained in sports medicine, observes the doctors reviewing a patient's brain scan. `That poor guy's in a bit of trouble,' says Lynagh Snr to his wife. It turns out to be their son's scan that they are witnessing. Lynagh's story is one of coruscating highs and crippling lows. It's the personal tale of a sportsman playing to the extremes of his profession, but also a human tale of surviving debilitating trauma and finding a new meaning to life. Seller Inventory # CLD9780007568741