Items related to Half a King (Shattered Sea, Book 1)

Half a King (Shattered Sea, Book 1) 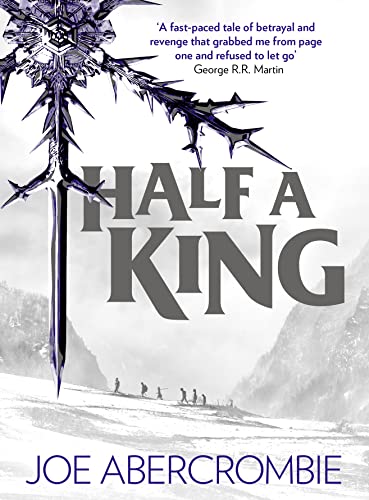 ‘A fast-paced tale of betrayal and revenge that grabbed me from page one and refused to let go’ GEORGE R.R. MARTIN

Prince Yarvi has vowed to regain a throne he never wanted. But first he must survive cruelty, chains and the bitter waters of the Shattered Sea itself. And he must do it all with only one good hand.

Born a weakling in the eyes of his father, Yarvi is alone in a world where a strong arm and a cold heart rule. He cannot grip a shield or swing an axe, so he must sharpen his mind to a deadly edge.

Gathering a strange fellowship of the outcast and the lost, he finds they can do more to help him become the man he needs to be than any court of nobles could.

But even with loyal friends at his side, Yarvi’s path may end as it began – in twists, and traps and tragedy...

‘This is my favourite Abercrombie book yet’ PATRICK ROTHFUSS

‘Joe Abercrombie is fast becoming my favourite writer. HALF A KING is a remarkable achievement ― thrilling, enthralling, and relentless. The action is frenetic, the characters are as sharp as the blades they wield, and the humour is biting. It's sure to garner him a whole new legion of fans’ DEREK LANDY

‘Perhaps his most technically proficient novel yet, I dare you to read the first chapter and try not to turn the next page. Some wondered if what makes Joe Abercrombie so different would survive the transition to YA. Abercrombie fans, have no fear: Polished and sharp, the un-adult-rated Abercrombie is still unadulterated Abercrombie’ BRENT WEEKS

‘HALF A KING can be summed up in a single word: Masterpiece’ MYKE COLE

‘With eye-popping plot twists and rollicking good action, HALF A KING is definitely a full adventure’ RICK RIORDAN

Joe Abercrombie was born in Lancaster on the last day of 1974, the son of an English teacher and a sociologist. He spent much of his youth in imaginary worlds, and left school with a good idea of how to make stuff up. He moved to the big city, learned to brew tea, and ended up as a TV editor, working on documentaries, events and concerts for bands from Iron Maiden to Coldplay. But in the darkness of the night he was still making stuff up, and his first book, The Blade Itself, was published in 2006. He now lives in Bath with his wife Lou and their three children Grace, Eve and Teddy and makes stuff up full-time.