Items related to Curtain Up: Agatha Christie: A Life in Theatre

Julius Green Curtain Up: Agatha Christie: A Life in Theatre

Curtain Up: Agatha Christie: A Life in Theatre 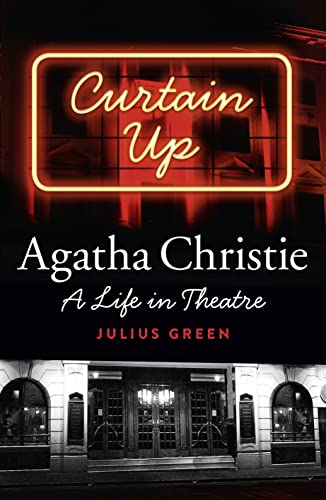 Agatha Christie's fame as a writer of detective fiction has obscured her theatrical work; the long-running hit The Mousetrap is just the best-known of a string of ventures that established her as the most successful female playwright of all time. Filled with extracts from unpublished plays and letters, this well-researched book charts her childhood theatre-going experiences, her first attempts to write for the stage and her subsequent popularity. Extensive endnotes can be downloaded from the publisher's website.

A thrilling look at the Queen of Crime ... Having sifted through the evidence in her personal archives both here and in the US, Christie expert Julius Green spends almost 600 pages proving the case for Dame Agatha's pole position in the pantheon of female playwrights ... Extensive quotations from unpublished and/or unperformed plays reveal a wit and nuanced understanding of human nature far beyond the novels. Daily Express

Her theatrical masterpieces have made her the most successful female playwright of all time ... Now, on the 125th anniversary of Agatha Christie's birth, ten new plays by her have been unearthed by British theatre producer Julius Green ... Exploring her plays from 'page to stage' he shows that Christie regarded writing books as her day job but found true creative fulfilment in the theatre. Daily Mail

Green turned detective himself and scoured archives around the world to uncover a number of unpublished, unknown works ... This book is a treat. Independent

--Independent From the Back Cover:

Agatha Christie is revered around the world for her books and the indelible characters she created. Lesser known is her writing for the stage--an extraordinary repertoire of plays that firmly established her as the most successful female dramatist of all time. Now author Julius Green raises the curtain on Christie's towering contribution to popular theatre, an element of her work previously disregarded by biographers and historians.

Starting with her childhood theatregoing experiences, Curtain Up uncovers Christie's first serious attempts at playwriting, with scripts that reveal a very different style from the now familiar whodunits for which she became famous. Later in her life, she enjoyed enormous global success with her work for the stage, but her record-breaking achievements in the West End and her conquest of Broadway came at a price: she had to fight against her own fame and felt obliged to delete her adored character Hercule Poirot from stories that had originally been created around him.

Green's revelations about Christie's passion for the theatre are illustrated with copious extracts from hitherto unknown plays and unpublished private letters, many of which he discovered in archives on both sides of the Atlantic. The illuminating exchanges between Christie, her agents and producers include extensive correspondence with the legendary 'Mousetrap Man', theatrical impresario Sir Peter Saunders.

Meticulously researched and filled with groundbreaking discoveries, Curtain Up sheds new light on Agatha Christie's artistry and adds a fascinating layer to her remarkable story.

1. Curtain Up: Agatha Christie: A Life in Theatre