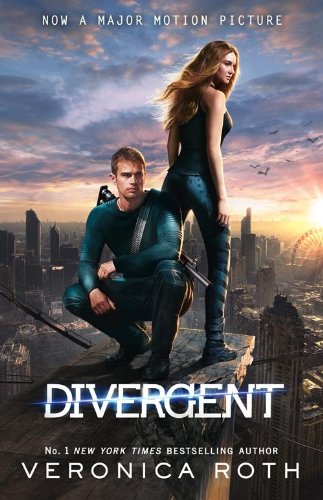 For sixteen-year-old Tris, the world changes in a heartbeat when she is forced to make a terrible choice. Turning her back on her family, Tris ventures out, alone, determined to find out where she truly belongs.

Shocked by the brutality of her new life, Tris can trust no one. And yet she is drawn to a boy who seems to both threaten and protect her. The hardest choices may yet lie ahead....

A debut novel that will leave you breathless.

“The next big thing.” (Rolling Stone )

“If you like Hunger Games & Twilight, then get stoked for DIVERGENT! Trust us on this―this baby is going to blow up BIG! And if you chose to remain factionless, then you’re gonna be one lonely soul.” (PerezHilton.com )

“A taut and shiveringly exciting read! Tris is exactly the sort of unflinching and fierce heroine I love. I couldn’t turn the pages fast enough.” Melissa Marr, bestselling author of Wicked Lovely

“DIVERGENT is a captivating, fascinating book that kept me in constant suspense and was never short on surprises. It will be a long time before I quit thinking about this haunting vision of the future.” James Dashner, author of ‘The Maze Runner’

“Well-written and brilliantly executed, DIVERGENT is a heart-pounding debut that cannot be missed. Tris stands out in her action-packed, thrilling, and emotionally honest journey to determine who she wants to be in a society that demands she conform. It’s dystopian fiction at its best!” Kiersten White, New York Times bestselling author of PARANORMALCY

“A memorable, unpredictable journey from which it is nearly impossible to turn away” – Publishers Weekly

“Divergent holds its own in the [dystopian] genre, with brisk pacing, lavish flights of imagination and writing that occasionally startles with fine detail.” – New York Times

“ A masterpiece of epic proportions and an outstanding debut novel.” – Narratively Speaking Blog

“Be prepared to sit on the edge of your seats as this heart-pounding thriller hypnotises you until the very last page.” – Fantasticbookreviews.com

In Beatrice Prior's dystopian Chicago, society is divided into five factions, each dedicated to the cultivation of a particular virtue--Candor (the honest), Abnegation (the selfless), Dauntless (the brave), Amity (the peaceful), and Erudite (the intelligent). On an appointed day of every year, all sixteen-year-olds must select the faction to which they will devote the rest of their lives. For Beatrice, the decision is between staying with her family and being who she really is--she can't have both. So she makes a choice that surprises everyone, including herself.

During the highly competitive initiation that follows, Beatrice renames herself Tris and struggles to determine who her friends really are--and where, exactly, a romance with a sometimes fascinating, sometimes infuriating boy fits into the life she's chosen. But Tris also has a secret, one she's kept hidden from everyone because she's been warned it can mean death. And as she discovers a growing conflict that threatens to unravel her seemingly perfect society, she also learns that her secret might help her save those she loves . . . or it might destroy her.