Items related to Deep Space: AN EPIC ADVENTURE FROM THE MASTER OF MILITARY... 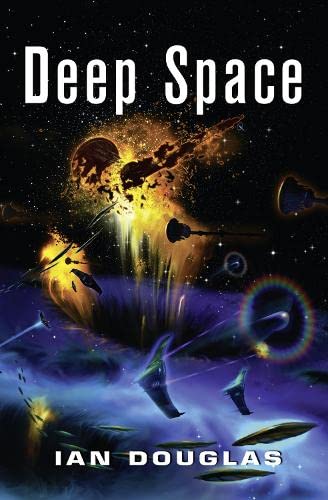 ‘The action is full-blooded and almost non stop, yet the well-developed background is surprisingly rich and logical ... As immersive as it is impressive’
Kirkus (Starred Review)

The fourth bookin the epic saga of humankind'swar of transcendence

Humanity had appeared to fend off theSh'daar assault once and for all, though they never learned why the alien empire was driven to halt Earth's advancement toward technological Singularity.

But in this war of worlds, victory is always elusive.And now a new battle begins.

After twenty years of peace, not one but two fragiletruces are unraveling. Alexander Koenig, the former Navycommander whose heroics forced the Sh'daar intosubmission, has won a second term as President of theUnited States of North America. But pursuing hismandate--sovereignty from the centuries-old EarthConfederation--becomes a risky proposition dueto events taking place on the other side of the galaxy.A Confederation research vessel has been ambushed.Destroyers are descending on a human colony. It seemsthe Sh'daar have betrayed their treaty, and allnations must stand united--or face certain death.

Book Description Paperback. Condition: Very Good. The book has been read, but is in excellent condition. Pages are intact and not marred by notes or highlighting. The spine remains undamaged. Seller Inventory # GOR005433484

Book Description Paperback. Condition: Good. A tan to the page edges/pages Good condition is defined as: a copy that has been read but remains in clean condition. All of the pages are intact and the cover is intact and the spine may show signs of wear. The book may have minor markings which are not specifically mentioned. Most items will be dispatched the same or the next working day. Seller Inventory # wbb0019811526

Book Description Paperback. Condition: Used; Good. **Simply Brit** Shipped with Premium postal service within 24 hours from the UK with impressive delivery time. We have dispatched from our book depository; items of good condition to over ten million satisfied customers worldwide. We are committed to providing you with reliable and efficient service at all times. Seller Inventory # 1509076

Book Description Soft cover. Condition: As New. No Jacket. 1st Edition. A first UK edition B format (130 x 198 mm) paperback. Unread. The fourth book in the Star Carrier science fiction series. SYNOPSIS: "Twenty years after the fragile truce with the Sh'daar, Koenig is now President of the USNA, and Gray is skipper of the CVS America. soon to be promoted to commander of the entire battle group, Koenig's old position, and one which he might not be ready for. The truce with the alien Sh'daar is unraveling as many predicted, and Humankind still knows little about them, or what they are." Packed weight 350gms. IN STOCK FOR IMMEDIATE DESPATCH  . Seller Inventory # 12091