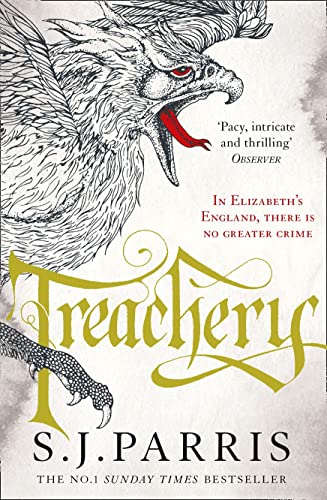 Perfect for fans of C.J. Sansom and The Name of the Rose, the fourth historical thriller featuring Giordano Bruno, heretic, philosopher and spy.

August, 1583. Giordano Bruno, a heretic fleeing the Inquisition, finds a new life working as a spy for Sir Francis Walsingham.

Along with his friend, Sir Philip Sidney, Bruno travels to Plymouth on the Queen s behalf. There, they meet Sir Francis Drake, who is preparing to launch a daring expedition against the Spanish, which could turn the tide of war.

Unbeknownst to Bruno, however, Sidney plans to stowaway with Drake s fleet and return a hero dragging Bruno with him to the New World. But when a murder occurs aboard Drake s own ship, fear and suspicion grip the fleet and threaten to abort the expedition before it begins.

Navigating the jealousies and loyalties of the crew, Bruno learns that someone with a deadly grudge is shadowing his investigation.

Tracking the killer through Plymouth s menacing backstreets, he uncovers some of the darkest secrets the city is harbouring. Failure will come at the highest cost not just for Bruno, but all of England...

· ‘Hugely enjoyable... It’s played straight, but never humourlessly so, and there’s just enough “proper” history amid the intrigue to keep purists on side’ Guardian

· ‘With its twisting plot and vivid scene-setting, TREACHERY confirms Parris’s growing reputation as a writer of historical thrillers’ Sunday Times

· ‘An evil bookseller and a terrifying brothel lie ahead; what’s not to like? Gripping and fun’ Observer

· ‘Parris’s Giordano Bruno series has been a joy. Her Elizabethan England is loud, pungent and blessedly free of some of the genre’s more egregious clichés. She wears her research lightly: at home with the detail of the period, she is quite happy to engage in a little creative anachronism to bring the story home’ Telegraph

· ‘There are echoes of CJ Sansom’s Shardlake series here. But Parris is better than the usual run of imitators. Her prose is taut and compelling. Her wielding of the historical material is always convincing but never overwhelming’ The Times

‘This is historical mystery fiction at its finest’ Publishers Weekly

· ‘A brilliantly unusual glimpse at the intrigues surrounding Queen Elizabeth I’ Andrew Taylor, bestselling author of The American Boy

S.J. Parris is the pseudonym of author and journalist Stephanie Merritt. It was as a student in Cambridge researching a paper on the period that Stephanie first became fascinated by the rich history of Tudor England and Renaissance Europe. Since then, her interest has grown and led her to create this series of historical thrillers featuring Giordano Bruno.

Stephanie has worked as a critic and feature writer for a variety of newspapers and magazines as well as radio and television. She currently writes for the Observer and the Guardian, and lives in Surrey with her son.

Book Description Paperback. Condition: New. Language: English. Brand new Book. The No. 1 Sunday Timesbestselling series The fourth book in S. J. Parris's bestselling, critically acclaimed series following Giordano Bruno, set at the time of Queen Elizabeth I August, 1585. England is on the brink of war. Sir Francis Drake is preparing to launch a daring expedition against the Spanish when a murder aboard his ship changes everything. A relentless enemy. A treacherous conspiracy. Giordano Bruno agrees to hunt the killer down, only to find that more than one deadly plot is brewing in Plymouth's murky underworld. And as he tracks a murderer through its dangerous streets, he uncovers a conspiracy that threatens the future of England itself. Perfect for fans of C. J. Sansom and Hilary Mantel Praise for S. J. Parris 'S. J. Parris is one of my favourite authors- and unquestionably our greatest living writer of historical thrillers.' A.J. Finn, No. 1 bestselling author of The Woman in the Window "Hugely enjoyable" Guardian 'This is historical mystery fiction at its finest' Publishers Weekly 'Her prose is taut and compelling. Her wielding of the historical material is always convincing but never overwhelming' The Times 'A delicious blend of history and thriller' The Times 'An omnipresent sense of danger' Daily Mail 'Colourful characters, fast-moving plots and a world where one false step in religion or politics can mean a grisly death' Sunday Times 'Pacy, intricate, and thrilling' Observer 'Vivid, sprawling . Well-crafted, exuberant' Financial Times 'Impossible to resist' Daily Telegraph 'Twists and turns like a corkscrew of venomous snakes' Stuart MacBride 'It has everything - intrigue, mystery and excellent history' Kate Mosse 'The period is incredibly vivid and the story utterly gripping' Conn Iggulden 'A brilliantly unusual glimpse at the intrigues surrounding Queen Elizabeth I'Andrew Taylor. Seller Inventory # AA89780007481224