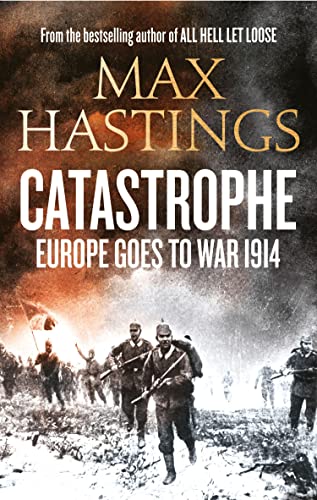 The Amazon History Book of the Year 2013 is a magisterial chronicle of the calamity that befell Europe in 1914 as the continent shifted from the glamour of the Edwardian era to the tragedy of total war.

1914: a year of unparalleled change. The year that diplomacy failed, Imperial Europe was thrown into its first modernised warfare and white-gloved soldiers rode in their masses across pastoral landscapes into the blaze of machine–guns. What followed were the costliest days of the entire War. But how had it happened?

In Catastrophe: 1914 Max Hastings, best-selling author of the acclaimed All Hell Let Loose, answers at last how World War I could ever have begun. Ranging across Europe, from Paris to St. Petersberg, from Kings to corporals, Catastrophe 1914 traces how tensions across the continent kindled into a blaze of battles; not the stalemates of later trench-warfare but battles of movement and dash where Napoleonic tactics met with weapons from a newly industrialised age. A searing analysis of the power-brokering, vanity and bluff in the diplomatic maelstrom reveals who was responsible for the birth of this catastrophic world in arms. Mingling the experiences of humbler folk with the statesmen on whom their lives depended, Hastings asks: whose actions were justified?

From the out-break of war through to its terrible making, and the bloody gambles in Sarajevo and Mons, Le Cateau, Marne and Tannenberg, this is the international story of World War I in its most severe and influential period. Published to coincide with its 100th Anniversary, Catastrophe: 1914 explains how and why this war, which shattered and changed the Western world for ever, was fought.

‘Magnificent ... Hastings writes with an enviable grasp of pace and balance, as well as an acute eye for human detail. Even for readers who care nothing for the difference between a battalion and a division, his book is at once moving, provocative and utterly engrossing’ Sunday Times

‘Masterly ... Hastings is a brilliant guide to that strange, febrile twilight before Europe plunged into darkness. Writing in pungent prose suffused with irony and underpinned by a strong sense of moral outrage, ‘Catastrophe’ is a frontal assault on what Hastings calls the “poets’ view” ... This is history-writing at its best, scholarly and fluent ... for anyone wanting to understand how that ghastly, much-misunderstood conflict came about, there could be no better place to start than this fine book’ The Times

‘One could scarcely ask for a better guide to these horrors than Max Hastings ... he is a superb writer with a rare gift for evoking the rhythm, mood and raw physical terror of battle ... If you are looking for a humane and compelling interpretive chronicle of the formative months of this horrific conflict, you will find none better’ Mail on Sunday

‘‘No part of the Great War compares in interest with its opening’, wrote Churchill, and Hastings does full justice to its appalling drama ... Catastrophe is rich in unexplored sources from every side of the conflict and every theatre of the war’ David Crane, Spectator

‘Vigorous and readable, making good use of the worm’s eye-view ... Engaging, well paced and, despite the grim subject matter, often entertaining’ New Statesman

‘Vivid and compelling ... superbly detailed and nuanced ... Hastings is a master of the pen portrait and the quirky fact ... yet his greatness as a historian – never shown to better effect than in this excellent book – lies in his willingness to challenge entrenched opinion’ Saul David, Evening Standard

Max Hastings is the author of twenty-six books, most about conflict, and between 1986 and 2002 served as editor-in-chief of the Daily Telegraph, then editor of the Evening Standard. He has won many prizes both for journalism and his books, of which the most recent are All Hell Let Loose, Catastrophe and The Secret War, best-sellers translated around the world. He is a fellow of the Royal Society of Literature, an Honorary Fellow of King’s College, London and was knighted in 2002. He has two grown-up children, Charlotte and Harry, and lives with his wife Penny in West Berkshire, where they garden enthusiastically.