Items related to A Foreign Country: From the Sunday Times Top Ten bestselling... 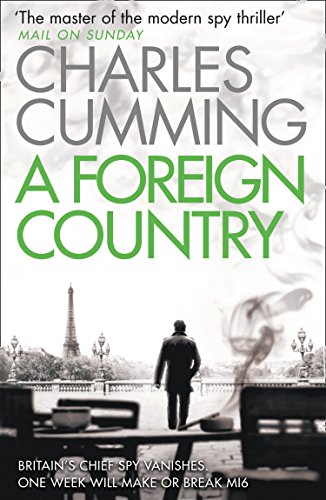 Winner of the CWA Ian Fleming Steel Dagger 2012 for Best Thriller of the Year. Selected by the Sunday Times and the Guardian as Best Thriller. Perfect for fans of John le Carré, a gripping and suspenseful spy thriller from ‘the master of the modern spy thriller’ (Mail on Sunday)

Six weeks before she is due to become the first female head of MI6, Amelia Levene disappears without a trace.

Disgraced ex-agent Thomas Kell is brought in from the cold with orders to find her – quickly and quietly. The mission offers Kell a way back into the secret world, the only life he’s ever known.

Tracking her through France and North Africa, Kell embarks on a dangerous voyage, shadowed by foreign intelligence services. This far from home soil, the rules of the game are entirely different – and the consequences worse than anyone imagines...

‘A thriller that has everything you could ask for – a twisty, sexy plot, topical themes, memorable characters and plentiful spy lore’ Sunday Times, Books of the Year

‘Refreshing, plausible and effective ... Best of all is the sheer pace of the narrative’ Spectator

‘You are likely to be up for most of the night to find out how this novel ends. It grips from the first page ... A fast-moving treat’ The Scotsman

‘From the first page to the last it has the ring of absolute authenticity. Tautly written, cleverly plotted...it reminded me strongly of the early books of John le Carré’ Robert Harris

On the vacation of a lifetime in Egypt, an elderly French couple is brutally murdered. Then, days later, on the streets of Paris, a young French accountant is kidnapped. When Amelia Levene, who in six weeks is due to take over as the first female Chief of MI6, disappears without a trace while in the south of France, it is the gravest crisis MI6 has faced in more than a decade. Desperate not only to find her but to keep the press from learning that she has gone missing, Britain's top intelligence agents turn to one of their own: disgraced former MI6 officer Thomas Kell.

"Eat your heart out, Daniel Craig...Cumming vividly showcases the undercover life of spies."--"GQ"

Tossed out of the Service only months before, Kell is given one final chance to redeem himself--all he has to do is find Amelia Levene: quickly, quietly, and at any cost. Following a trail that leads him to France and then Tunisia, Kell uncovers a shocking secret and a conspiracy that could have unimaginable repercussions for Britain and its allies. All that stands in the way of personal and political catastrophe is Kell himself...

Book Description Paperback / softback. Condition: New. New copy - Usually dispatched within 4 working days. Winner of the CWA Ian Fleming Steel Dagger 2012 for Best Thriller of the Year. Selected by the Sunday Times and the Guardian as Best Thriller. Perfect for fans of John le Carre, a gripping and suspenseful spy thriller from `the master of the modern spy thriller' (Mail on Sunday). Seller Inventory # B9780007346431