Items related to Death in the Clouds (Poirot)

Death in the Clouds (Poirot) 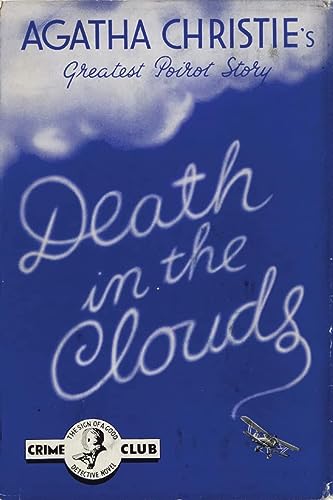 A facsmile first edition hardback of the Poirot book, in which a murder is committed on a flight to Paris.

From seat No.9, Hercule Poirot was ideally placed to observe his fellow air passengers. Over to his right sat a pretty young woman, clearly infatuated with the man opposite; ahead, in seat No.13, sat a Countess with a poorly-concealed cocaine habit; across the gangway in seat No.8, a detective writer was being troubled by an aggressive wasp.

What Poirot did not yet realize was that behind him, in seat No.2, sat the slumped, lifeless body of a woman.

“It will be a very acute reader who does not receive a complete surprise at the end.”
Times Literary Supplement

But Hercule Poirot is also on the flight and his discovery of a poisoned dark leads him to believe that the wasp did not cause her death.

Poirot has a large cast of characters to choose from in this ‘locked-room’ mystery and working with Scotland Yard and the Sûreté he sets out to discover the truth in his own very methodical way.

1. Death in the Clouds

2. Death In The Clouds