Items related to Disney Fairies – Fairy Dust and the Quest for...

Carson Levine, Gail Disney Fairies – Fairy Dust and the Quest for the Egg

Disney Fairies – Fairy Dust and the Quest for the Egg 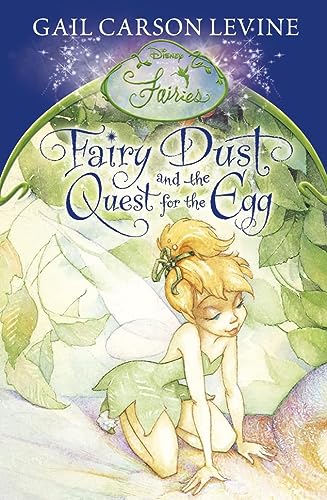 Paperback fiction edition of Gail Carson Levine’s fairytale written for Disney’s Fairies. This is the untold story of Never Land fairies Tinker Bell, Prilla and the magical Mother Dove and their quest to save the island.

When baby Sara Quirtle laughed for the first time, that laugh flew all the way to Neverland and became Prilla, the first Never Fairy to be born without a Talent. Tinker Bell, a pots and pans Talent fairy, reluctantly takes the newcomer under her wing and shows her around Fairy Haven, their home.

Soon, Neverland is struck by a terrible hurricane and Prilla, Tink and the rest of the fairies must rally round to save Mother Dove, whose feathers provide their magical fairy dust and egg is the source of all of Neverland’s magic.

Three unlikely fairy heroes, Prilla, Rani and the wicked Vidia, must go on a quest to collect three treasures and convince Kyto, an evil dragon, to restore the egg before Mother Dove dies and Neverland’s magic is lost.

Time is of the essence, Peter Pan is losing his baby teeth and there is only three-days worth of fairy dust on the whole island. Can Prilla work out what her Talent is before it is too late for Mother Dove, the fairies and the whole of Neverland?

WELCOME BACK TO NEVERLAND...
WHERE THE NEVER FAIRIES LIVE!
Prilla is the newest fairy in Neverland. But Tinker Bell
(yes, that's THE Tinker Bell) is not sure what to make of the
new arrival. For starters, Prilla doesn't seem to have a talent
– and every Never Fairy has a special talent!
Can the Never Fairies survive a terrible hurricane, Captain
Hook, snobby mermaids and the evil dragon, Kyoto?
Even YOU are critical in deciding Neverland's fate.
Written by Newbery Award-winning author
Gail Carson Levine with cover illustrations by
David Christiana.

Gail Carson Levine grew up in New York City and has been writing all her life. Her poems have been published in two anthologies of teenage poetry. She and her husband, David, collaborated on a children’s musical that was produced by a theatre in Brooklyn. Today she, David and their airedale, Jake, live in a 200 year old farmhouse in Brewster, New York.