Items related to Cards on the Table (Poirot)

Cards on the Table (Poirot) 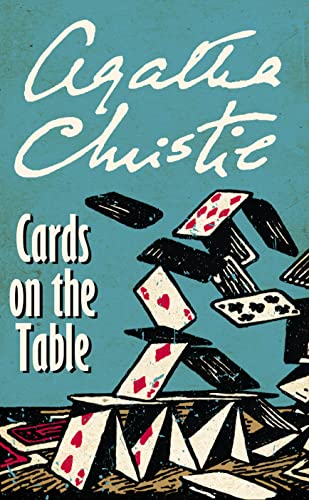 A flamboyant party host is murdered in full view of a roomful of bridge players...

Mr Shaitana was famous as a flamboyant party host. Nevertheless, he was a man of whom everybody was a little afraid. So, when he boasted to Poirot that he considered murder an art form, the detective had some reservations about accepting a party invitation to view Shaitana’s private collection.

Indeed, what began as an absorbing evening of bridge was to turn into a more dangerous game altogether...

“The finest murder story of her career... Mrs Christie has never been more ingenious”
Daily Mail

1. Cards on the Table (Poirot)

Book Description Paperback. Condition: Good. The book has been read but remains in clean condition. All pages are intact and the cover is intact. Some minor wear to the spine. Seller Inventory # GOR001301082

2. Cards on the Table (Poirot)

4. Cards on the Table (Poirot)

Book Description Paperback. Condition: Fair. A readable copy of the book which may include some defects such as highlighting and notes. Cover and pages may be creased and show discolouration. Seller Inventory # GOR001971621

5. Cards on the Table (Poirot)

Book Description Paperback. Condition: Very Good. The book has been read, but is in excellent condition. Pages are intact and not marred by notes or highlighting. The spine remains undamaged. Seller Inventory # GOR001193023

6. Cards on the Table

7. Cards on the Table

Book Description HarperCollins, 1996. Softback. Condition: Very Good. Dust Jacket Condition: No dustjacket. Second. Second impression B format (130 x 198 mm) paperback with a 2-9 number sequence published by HarperCollins in their Diamond Anniversary Edition. This special commemorative edition of Cards on the Table marks 60 years since its first publication in 1936. Light tanning to pages and some creasing to covers. "Five people in one room; four of them are absorbed in a game of bridge, the fifth sits quietly by the fire with a thin steel dagger in his heart. Any one of the four suspects, given the right circumstances, might have committed the crime. As Hercule Poirot is already aware, each of them has previously carried out a successful murder with some expertise, making this gruesome case almost impossible for him to solve." IN STOCK FOR IMMEDIATE DESPATCH. Seller Inventory # 9649

8. Cards on the Table. (Hercule Poirot)

9. Cards on the Table (Poirot)