Items related to The Olympic Conspiracy (The Seven Fabulous Wonders...

The Olympic Conspiracy (The Seven Fabulous Wonders series): No. 5 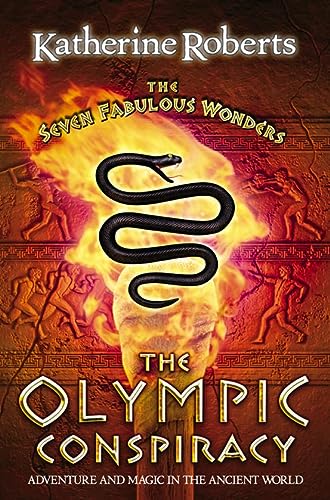 ADVENTURE AND MAGIC IN THE ANCIENT WORLD

The fifth magical book in the Seven Fabulous Wonders series. The Statue of Zeus at Olympia provides the backdrop for another thrilling adventure.

Sosi closed his eyes, wondering what would go wrong next. They must have been crazy to think they could get away with cheating at the Olympic Games.

Sosi's brother Theoron is in training for the Olympic Games. When he is injured, only Sosi can help him – but gets more than he bargained for when he takes Theoron's place. Who is trying to sabotage the Games, and why? And what's so important about the sacred fire and the Statue of Zeus...?

‘A thrill-a-minute mix of myth, history, excitement and magic. Roberts has thrown lots of gripping ingredients into the first book of The Seven Fabulous Wonders series and it all works to great effect.’ Sunday Morning Post

The Babylon Game
‘Katherine Roberts is a children’s author of genuine skill and imagination, and The Babylon Game is one of her most engaging titles.’ Publishing News

ADVENTURE AND MAGIC IN THE ANCIENT WORLD