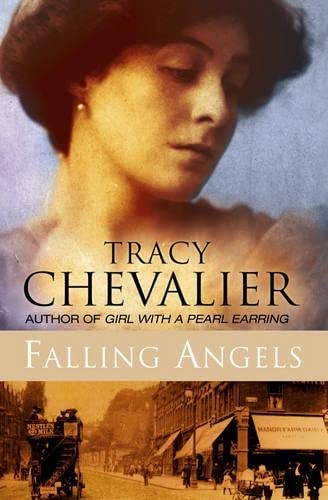 A welcome return to a writer whose last book, the much loved and admired Girl With a Pearl Earring has been such an outstanding success.

1901, the year of the Queen’s death. The two graves stood next to each other, both beautifully decorated. One had a large urn – some might say ridiculously large – and the other, almost leaning over the first, an angel – some might say overly sentimental.

The two families visiting the cemetery to view their respective neighbouring graves were divided even more by social class than by taste. They would certainly never have become acquainted had not their two girls, meeting behind the tombstones, become best friends. And furthermore – and even more unsuitably – become involved in the life of the gravedigger’s muddied son.

As the girls grow up, as the century wears on, as the new era and the new King change social customs, the lives and fortunes of the Colemans and the Waterhouses become more and more closely intertwined – neighbours in life as well as death.

In Falling Angels, Tracy Chevalier has combined a moving elegy to the lost innocence of the 21st century's grandmothers and great-grandmothers with a reminder of the strength and modernity of their aspirations and achievements. Maude and Livy are aged six in 1901, when Queen Victoria has just died and the whole country is in mourning. In 1910 they are almost young women who have experienced their own personal losses and belong to a generation who are no longer prepared to wear black for months to mark the death of Edward VII. Their families, the Colemans and the Waterhouses ("no relation to the painter"), meet in a graveyard beside their family graves. One has a large marble angel erected above it, the other an urn (an allusion more to the morbidity of a Victorian columbarium than the eternity of Keats' pre-Victorian "unravish'd bride of quietness"). Their choices of a monument to death seem to reflect their differing attitudes to life, but Chevalier makes clear that these two families are forever linked in their fates and aspirations.

The story moves swiftly, switching to multiple narratives: young but quickly maturing Maude and Livy; the adult Colemans and Waterhouses; their servants; and Simon the gravedigger boy. Chevalier has chosen carefully who speaks when, and who, more importantly, keeps silent. Livy's little sister Ivy May is one of the most beguiling figures of the work, but is given only two sentences of her own (and those two bring a lump to the throat). Mrs Coleman's experiences with the campaign for women's suffrage are marginalised through silence; Maude and Livy tell instead of their reaction to the women's antics. And while Falling Angels may be a story of women, despite, or perhaps because of their exclusion from contemporary politics, Simon's observations are the most honest and revealing.

Chevalier herself writes after the story's end that "the Acknowledgements is the only section of a novel that reveals an author's "normal" voice. Every character uses their "normal" voice in this novel, and Chevalier's own voice excels in ensuring that each one is unique (for example, everything is "delicious" for Livy), so that, like Mr Coleman mourning his daughter growing up, you will "miss her when she goes". --Olivia Dickinson

'As in Girl with a Pearl Earring, Chevalier displays an enviable knack for evoking a particular period and place, and her handling of some of the novel's most poignant moments is unfailingly sensitive.' Independent on Sunday

'Falling Angels is as cleverly atmospheric as Girl with a Pearl Earring. A well researched and vividly imagined tale.' Sunday Telegraph

'Chevalier handles this material beautifully. The result is a novel that shows both the strangeness of the world as it was and its closeness to our own time.' The Times

‘Pearl Earring fans will love the evocation of atmosphere one would expect from this writer. Tracy Chevalier gives the kiss of life to the historical novel.' Independent